The MPBSE results will be out on mpbse.nic.in and also on the official results partner website hosted by National Informatics Centre (NIC), mpresults.nic.in.

MP Board results 2019: The results for MP Board Class 10 and Class 12 exams expected soon

MP Board results 2019: MPBSE or commonly known as MP Board (or Madhya Pradesh Board of Secondary Education) is expected to declare the Class 10 and 12 results on May 15. According to reports, the MP Board results will be released on Wednesday. The MP Board results will be announced on the official website of the organisation, mpbse.nic.in and also on the official results partner website hosted by National Informatics Centre (NIC), mpresults.nic.in. Last year, The MP Board or MPBSE 10th and 12th results were announced on May 14 in which 66 per cent students passed in Class 10 and 68 per cent students passed in Class 12.

MP Board results 2019: Where to check

MP Board results will be released on following links:

Apart from the official websites, the results can be expected from third party portals like examresults, jagran josh and indiaresults etc. 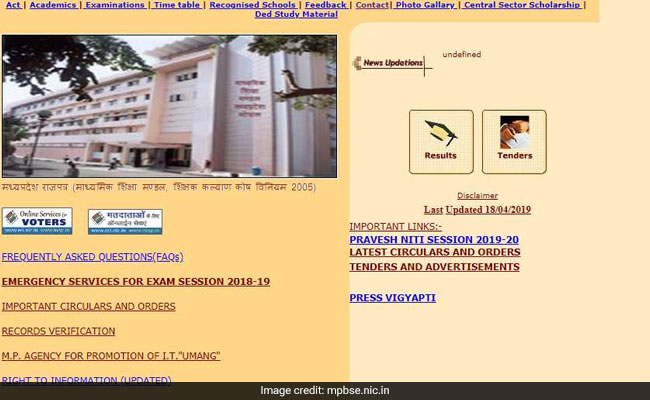 MP Board results 2019: The results will be announced on mpbse.nic.in and mpresults.nic.in

Several other boards, including CBSE, CISCE (which conducts ICSE exams), Bihar, Uttar Pradesh, Tamil Nadu, Karnataka, Punjab, Himachal Pradesh and Chhattisgarh, have announced the Class 10 (also known as SSC or Matric in various parts of the country) and 12th results in last one month. Results are expected soon for other major boards like Maharastra, Gujarat, Madhya Pradesh, Rajasthan, Odisha, Assam and West Bengal.

Step Two: Click on either of the link given there of MP Board 12th result or MP Board 10th result

Step Four: Submit the details and check your MP Board results from next page.

The 10th exams concluded on March 7 with Hindi paper.

The Class 12 general and Vocational MP Board examinations began from March 2 with Special Language Hindi paper and will be concluded on April 2 with Informatic Practices.

The examinations were held in two time schedules; 9 am to 12 afternoon and 1 pm to 4 pm. The morning shift was held for general candidates while the afternoon shifts were held for "Divyang" candidates.

Ahead Of College Reopening In Kerala, Education Minister To Convene Meeting With Principals On September 10