The Department of Electrical and Electronics Engineering of TKM College of Engineering, Kollam is in the forefront of the Mission Reconnect program initiated by Kerala State Electricity Board.

TKM College of Engineering, Kollam is in the forefront of the Mission Reconnect program initiated by KSEB

The Department of Electrical and Electronics Engineering of TKM College of Engineering, Kollam is in the forefront of the Mission Reconnect program initiated by Kerala State Electricity Board for the flood affected people of the state. The students, alumni, faculty and staff of the Department have joined hands with KSEB in restoring electricity to the flood hit and submerged houses of Kuttanad, Chengannur and Pathanamthitta areas.

Now, the TKM team is targeting a minimum of 400 plus temporary electrical connection boards consisting of isolator, ELCB, a lamp holder, a 3-pin power socket and an LED indicator. This board, according to a statement from the college, will be used to connect electrical supply from the KSEB service main board, replacing the already damaged wiring of the houses.

This mission started with the concern experienced by the KSEB officials who were finding it difficult to charge the houses which were submerged in water for several days.

The discussion of the Electricity Board Engineers with the Head of the Department, Dr. Bijuna Kunju K, gave the idea of producing such boards in a short period of time. 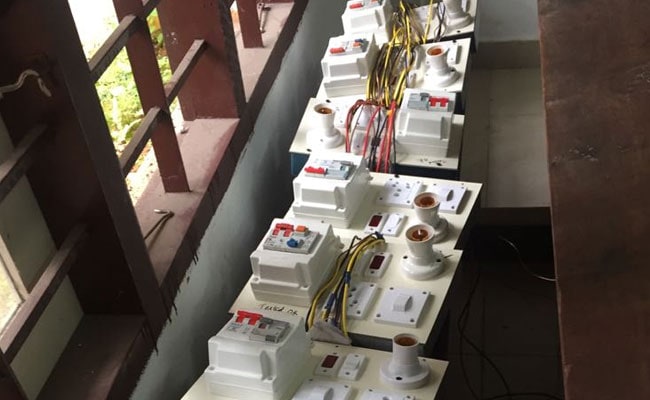 Electrical connection boards made by the students of TKM College of Engineering, Kollam for KSEB's relief efforts.

The experts from Electrical Inspectorate, KSEB and IEEE have lent support to this noble venture.

Ms. Sunitha Beevi. K, Assistant Professor, said that due to this venture, the college is able to bring light for the people who were suffering from the devastating flood.

Mr. Hany S. F, the instructor of the Department, pointed out that this temporary board will be most beneficial to the most underprivileged section of the society.

Students were excited at the opportunity to volunteer themselves for the flood affected people.

Sourabh, a second year student, said he is overwhelmed at the completion of 100 boards in one day.

Rahul, a final year student, added that he was eager to deliver his efforts and time using his technical skills for the rehabilitation of the flood submerged households.

The alumni of the TKM college have generously contributed approximately Rs  6 lakhs so far to provide individual units costing around Rs. 2000.

Donate Your Time: A Campaign To Teach School Students Online During COVID-19 Crisis

Srinagar DPS Shines In Board Exams Amid Prolonged Kashmir Lockdown