Indian Institute of Technology (IIT) Madras has seen an increase in Pre-Placement Offers (PPOs) yet again this Academic Year.

As many as 130 students of IIT Madras got PPOs as against 114 in the preceding year.
Chennai:

Indian Institute of Technology (IIT) Madras has seen an increase in Pre-Placement Offers (PPOs) yet again this Academic Year. As many as 130 students (Excluding Department of Management Studies students) of IIT Madras got PPOs (as of 22nd Oct 2018) as against 114 in the preceding year. One of the principal reasons for this strong show in PPOs has been the robust internship program of IIT Madras, which results in students getting to intern in companies that are large recruiters, said a statement from the Institute.

The Department of Management Studies (DOMS), IIT Madras, which coordinates its own internships and placements, also recorded an increase in PPOs during 2018-19.

The internships are facilitated through an Institute-coordinated process. The constant increase in PPOs is the result of excellent performance of students during the internships.

Speaking about the increase in PPOs this year, Prof. Manu Santhanam, Advisor, Training and Placement, IIT Madras, said, "The good number of PPOs is hopefully indicative of a strong placement season. The steady increase over the years in PPOs also points to the value placed by recruiters on the internship program."

The major sectors that offered PPOs during 2018-19 are as follows: 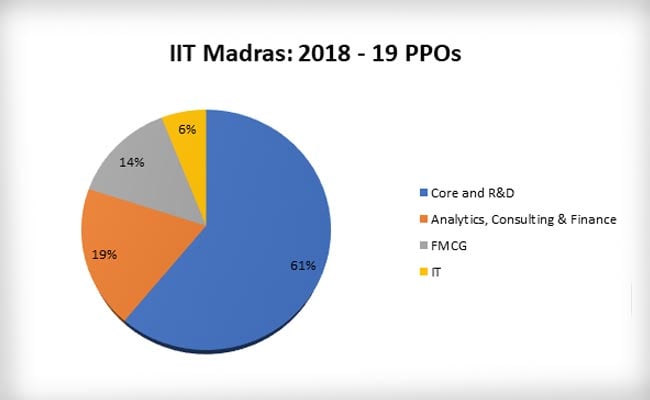 The Companies that offered the highest number of PPOs are as follows:

Speaking about the placement process at DOMS, Prof. Usha Mohan, Placement Coordinator, DoMS, IIT Madras, said, "A good number of companies visiting our Department do provide pre-placement offers to our students during their summer internships. We constantly strive to invite and work with firms that offer challenging projects and multiple job profiles to our students. We also support MSMEs and non-profit firms through our departmental initiatives."

Students also got to work on social organizations such as Rural Technology Action Group (RuTAG) and Government projects (from Madhya Pradesh) as part of summer internship process, said the statement from IIT Madras.

New Site For IIT To Be Announced In A Month, Says Goa Chief Minister