The construction of this check dam began in March 2019 and the structure was completed by August 2019, before the onset of monsoon. 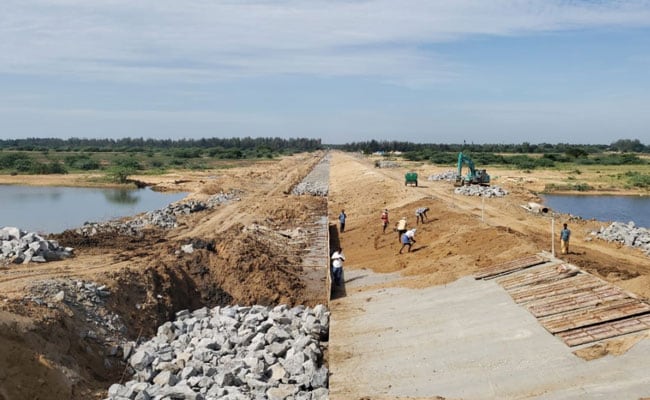 Indian Institute of Technology (IIT) Madras researchers have designed and overseen the construction of a check dam across Palar river that has resulted in the significant increase in storage of surplus rainwater in the river, according a statement released by the Chennai-based Institute.

The design of IIT Madras researchers also resulted in a savings of nearly Rs. 49.5 crore for this project, which was funded under Corporate Social Responsibility (CSR) activities of the Madras Atomic Power Station (MAPS) at Kalpakkam.

While a conventional weir-type check dam costs around Rs. 82 crore and takes up to one year for construction, this project was completed with a funding of Rs. 32.5 crore in six months, the Institute said.

The construction of this check dam began in March 2019 and the structure was completed by August 2019, before the onset of monsoon.

Speaking about the unique features of this check dam, Prof R. Sundaravadivelu, Institute Chair Professor, Department of Ocean Engineering, IIT Madras, who lead the efforts from IIT Madras said: "This unique project was implemented successfully using the diaphragm wall as a deep foundation for check dam, ensuring safety and arresting seawater intrusion. The funding of MAPS, encouragement of the District Collector and cooperation of PWD is greatly acknowledged."

The impact of climate change in recent years has affected the river, which has resulted in a water crisis in the region.

To overcome the water scarcity and prevent the seawater intrusion, it was proposed to construct a check dam across Palar river (at Vayalur, tail end of the river).

The main function of the check dam was to obstruct the flow of water and create a ponding to conserve the rainwater that allows infiltration to the Aquifer beneath to improve the groundwater levels.

Palar river runs 390 km, including parts of Karnataka, Andhra Pradesh and Tamil Nadu but 80 per cent of the river is in Tamil Nadu - commencing in Vellore district.