Arvind Kejriwal and three of his ministers have been camping in protest at a room at Lieutenant Governor Anil Baijal's Raj Niwas since last Monday.

New Delhi: In a strong reprimand for Delhi Chief Minister Arvind Kejriwal, the capital's high court today observed that his week-long sit-in at the office of the Lieutenant Governor, Anil Baijal, is unwarranted. "This can't be called a strike. You can't go inside someone's office or house and hold a strike there," said the court.

Mr Kejriwal is holding an unprecedented protest against the Lieutenant Governor, who, he says, is working in a brazenly partisan fashion and at the instance of Prime Minister Narendra Modi to prevent the Delhi government from functioning.

Specifically, the Chief Minister contends, bureaucrats or IAS officers are refusing to show up to work - or working only selectively - and the Lieutenant Governor must intervene to change that. The court hearing this morning was based on a petition that argues that the protest is unconstitutional, that Mr Kejriwal and his ministers "consider themselves above the law" and should be ordered to get back to work.

The court said it will take up the case on Friday and asked for the officers to be included in the petition. 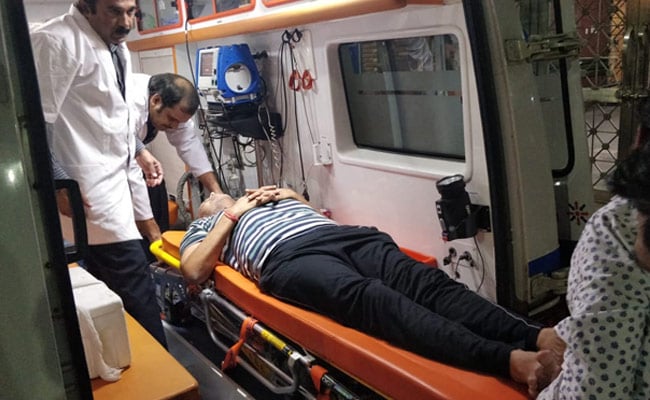 Satyendar Jain was hospitalised on Sunday night after his health started deteriorating.

Mr Kejriwal says till Mr Baijal asks bureaucrats to change their approach, he will not leave the waiting room of the Lieutenant Governor's house-cum-office in Delhi. He has been planted on sofas there with three of his senior ministers since Monday.
Two of them - Manish Sisodia and Satyendar Jain - are also on a hunger strike. Mr Jain was hospitalized last night.

On Saturday, four Chief Ministers including Mamata Banerjee visited Mr Kejriwal's wife at his home after they said they were denied permission to meet him at the Lieutenant Governor's waiting room. They urged the Prime Minister yesterday to resolve the crisis and said Mr Baijal's role in it proves that the centre is bent on violating the federalism that is essential to India's political structure. "There is a dharna at Chief Minister's office too. Who has allowed it?" AAP leader Sanjay Singh said.
The "sofa dharna" has been challenged this morning in the high court by BJP leader Vijender Gupta.

The conflict with IAS officers erupted late in February when Anshu Prakash, the Chief Secretary or senior-most bureaucrat, alleged that he was assaulted at a midnight meeting at the Chief Minister's house. Mr Kejriwal's Aam Aadmi Party or AAP denies the accusation; CCTV footage from Mr Kejriwal's house as been examined by the Delhi police and he was interrogated for several hours, a move that was also described by political opponents of the BJP as blatant harassment of an elected Chief Minister.

Yesterday, IAS officers denied that they were on "strike" and said they skipped meetings only when they felt their safety and self-respect was at risk. Mr Kejriwal, from his sofa dharna, issued a statement, promising to "ensure their safety and security with all powers and resources available at my command" and describing them as "part of my family."

Promoted
Listen to the latest songs, only on JioSaavn.com
The bureaucrats are seen as caught in the middle of the crossfire between AAP and the BJP, which is often accused by regional parties, including some of its own allies, of disrespecting the basic rights of states.

Mr Kejriwal claims that since his AAP won all but three seats in Delhi in 2015, defeating the BJP's campaign which was led by PM Modi, he is being punished for a victory that Mr Modi cannot come to terms with.

Delhi Metro To Soon Roll Out Its First E-Auto Service