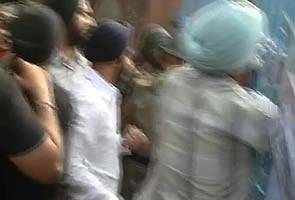 New Delhi: Two armed factions got into a bloody fight at a gurudwara in Delhi today, reportedly over upcoming elections that will determine who administers the Sikh temple.

The incident took place at Rakhabganj Gurudwara this morning ahead of a meeting of the Delhi Sikh Gurudwara Prabhandak Committee (DSGPC). Two people were injured in the clash which involved supporters of Paramjeet Singh Sarna and Manjeet Singh.

According to reports, the scuffle began when Manjit Singh, the president of Shiromani Akali Dal Delhi, tried to enter the gurudwara to attend the meeting. Swords were used during the clash. Sources say security men inside the temple, known as task force, blocked Manjeet Singh's path when he was entering the gurudwara. He claimed he was attacked with swords. Both sides hurled stones at each other.

Mr Singh's faction claims a member of the DSGPC had sent an invitation letter to him to attend the meeting. However the DSGPC denied his claims and said he doesn't have right to attend because he is not part of core group.

Harvinder Singh Sarna, the general secretary of the committee, said that the cops were alerted of a possible disruption during the meeting. Accusing the Manjit Singh faction of starting the scuffle, Mr Sarna said, "We told them meeting should only have executive members. They were the ones to attack first. What were we supposed to do?  Delhi Police should find out why he needs security? Is there a danger to his life?"

According to police the area has now been secured and the situation has been brought under control.
Comments
Delhi gurudwara violence