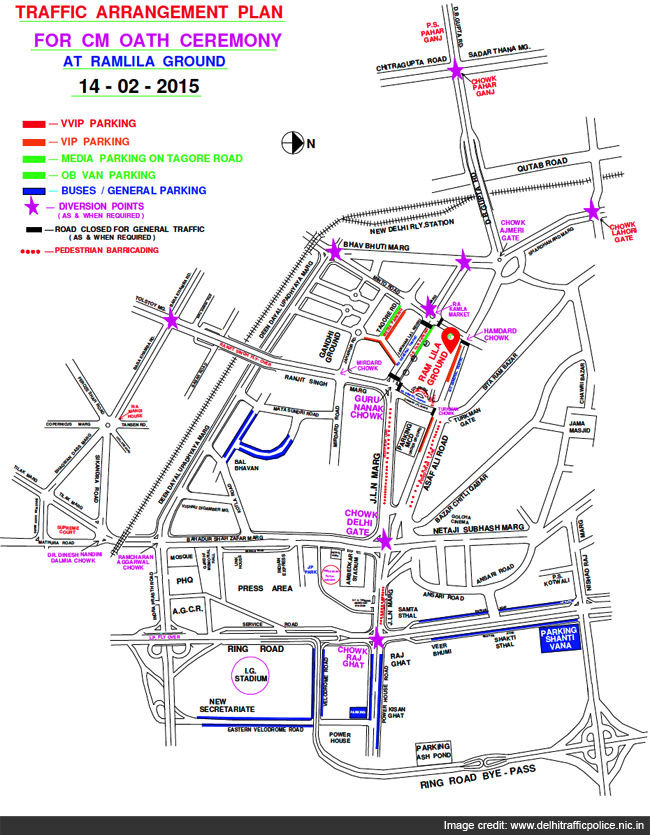 According to a traffic advisory issued on Friday, heavy traffic is expected in the areas of New Delhi and Central Delhi. Roads in Central Delhi would be affected between 10 AM to 2 PM (depending upon the conclusion of the ceremony). The swearing-in ceremony will be held at 12:00 noon.

"There would be restriction or stopping/diversions of the vehicles as per the functional requirements and ground situation. Public is requested to use metro services while motorists are advised to follow the directions of the traffic policemen deployed on duty to avoid inconvenience," said Joint Commissioner of Police (Traffic) Anil Shukla.

"A number of important dignitaries, general public, and the media are scheduled to attend the ceremony. In this regard, elaborate security and traffic arrangements have been planned to ensure traffic circulation, pedestrians' movement, safety of visitors as well as that all the dignitaries and invitees reach the venue in time and the function is held smoothly," said Mr Shukla.

Traffic Police has been briefed to be helpful to patients and their relatives, said Mr Shukla.

Parking for officials will be present at Chaman Lal Marg, Asaf Ali Road while general parking shall be at Tagore Road behind Civic Center and Mata Sundri Road. General parking for buses would be at Power House Road, Veldrome Road, Rajghat parking, Shanti Van Parking, Service roads Rajghat and Samtha Sthal as per requirements.

Promoted
Listen to the latest songs, only on JioSaavn.com
Only limited number of buses would be parked on Mata Sundri Road.

All other buses carrying persons for the ceremony would be diverted to Rajght and Veldrome Parking, police said.