The Delhi government officers stuck to their stand that they would not meet ministers and the MLAs for meetings till Mr Kejriwal tenders a "written public apology" for the alleged assault. 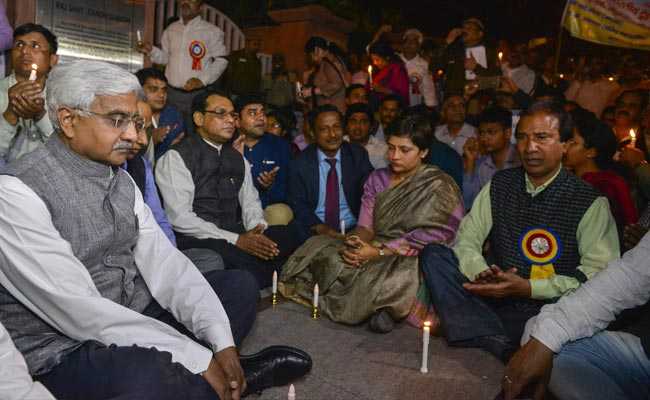 The "March for Dignity" was led by Chief Secretary Anshu Prakash.

New Delhi: Rift between the bureaucracy and the political executive over an alleged attack on the Chief Secretary by two AAP legislators widened on Wednesday with top Delhi government officials and employees taking out a "March for Dignity" and the Aam Aadmi Party (AAP) terming the comments made by the bureaucrats against the ministers as "illegal".

The Delhi government officers stuck to their stand that they would not meet ministers and the MLAs for meetings till Mr Kejriwal tenders a "written public apology" for the alleged assault.

On the other hand, Deputy Chief Minister Manish Sisodia criticised Lieutenant Governor (LG) Anil Baijal for showing "full support" to the IAS Association's "fatwa" (diktat) and "encouraging" them to boycott meetings called by the ministers.

The government employees' association also attacked the Deputy Chief Minister by terming Mr Sisodia's remarks about government officers at a seminar on Tuesday as "condemnable".

Although the Chief Minister met the LG in the evening, it did not help break the impasse. After the meeting, Mr Baijal reiterated that Mr Kejriwal should reach out to government employees to resolve the issue.

Last week, Chief Secretary Anshu Prakash alleged that he was beaten up by AAP MLA Amanatullah Khan and another party MLA in the presence of Mr Kejriwal at the Chief Minister's residence in Delhi on February 19 night, where he had been called for a meeting.

Addressing the media, senior AAP leader Ashutosh, citing tweets of bureaucrats like Amitabh Kant and Varsha Joshi, among others, said: "They have been clearly criticising the Delhi government, against rules. Why shouldn't action be taken against them?"

Hinting at the Bhartiya Janata Party (BJP)'s hand in the IAS Association's protest, Ashutosh demanded that the call details of senior bureaucrats be made public to find out who was influencing them to go against the government.

Mr Ashutosh said the bureaucrats did not condemn the attack on AAP leaders Imran Hussain and Ashish Khetan at the Delhi Secretariat last week, when the Chief Secretary made the attack allegation. "Has any of the senior officers condemned that?" he said.

Later in the evening, the "March for Dignity", led by the Chief Secretary, started from the Delhi Secretariat and ended at Raj Ghat. It saw the participation of around 800 officers and employees holding candles in their hands.

After the march, representatives of Government Employees Joint Forum said that they would continue to not attend meetings or talk to ministers over phone and officers would contact ministers and MLAs only through the written channel till Mr Kejriwal tenders a "written public apology".

The association earlier in the day acknowledged efforts made by Delhi Social Welfare Minister Rajendra Pal Gautam and Transport Minister Kailash Gahlot to resolve the impasse, but insisted on the written public apology.

A senior member of the association told IANS that the ministers came for discussion through an informal channel and that if they were serious about it, then they should approach the association formally.

After the meeting with Mr Kejriwal, Mr Baijal said in a tweet: "Reassured him (Kejriwal) of my complete support for steps to remove mistrust with government employees. Encouraged again to reach out to them. It is important for all to work together in public interest in a secure and dignified work environment."

However, the Chief Minister said the meeting was to discuss desilting of drains and protection of schoolgirls from eve-teasing.

In a tweet, Mr Kejriwal did not mention the alleged attack in the list of topics discussed at the meeting.

Earlier in the day, in a letter to the LG, Mr Sisodia attacked the latter, saying: "If one IAS officer comes to you with a complaint against a minister, you ignore his faults and start wiping his tears. You encourage him to boycott meetings called by the ministers."

Promoted
Listen to the latest songs, only on JioSaavn.com
"For three months, 10,000 Angadwadi workers, 10,000 Anganwadi helpers and 10,000 Anganwadi landlords have not received their salaries because of them (IAS officers)," he said, adding that it was affecting five lakh children who are beneficiaries of Anganwadi.

Mr Sisodia requested the LG to order a probe against the officers whose misconduct had led to the Anganwadi workers not being paid on time and urged to "take strict action against them".
Comments
Anshu PrakashAAPMarch For Dignity