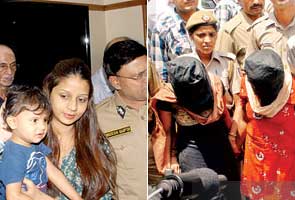 New Delhi: A recharge coupon of a cellphone acted as the all important piece of evidence that led Delhi police to the kidnappers of one-and-a-half-year old Ishaan, who was abducted on April 24. The boy, who was allegedly kidnapped by his maid, was rescued within 72 hours of the incident from the Faridabad area, Police Commissioner BK Gupta said on Wednesday. Five people have been arrested, including the maid Seema.

The cops did not find anything expect a recharge coupon, at the victim's home, as clue. The coupon belonged to Seema. Police brought out Call Detail Records (CDR) of her cellphone number. In the records cops found the number of Pratima, the ex-maid of the family and one of the accused, who had gone to her native village in Orissa. A team was sent and police came to know that Pratima has a lover, Ashok Kiro, who lives in the Capital. Police detained Ashok from Khijrabad area in south Delhi and interrogated him. He broke down and gave up their whole plan to the cops. Police then traced down and arrested the other four accused.

Addressing the media Delhi Police Commissioner BK Gupta said that Ishaan was rescued from Faridabad area in Haryana. Those arrested have been identified as Seema alias Savita Karketa, the new maid of the house, Ashok, Pratima, the ex-maid, Krishan Dev and Shanti alias Anu Begam who ran a placement agency in southeast Delhi.

The Police Commissioner said that the accused had planned to call the family for a ransom of Rs 2 crore after a month but were arrested yesterday. "They had planned that when the family would lose hope of finding the kid, they would contact them for ransom. Krishan Dev is the mastermind behind the kidnapping. 15 teams of senior police officials were formed and pressed into service to nab the culprits. On Tuesday night police arrested two men and two women in this connection and rescued the boy following a tip-off," said Gupta.

As per the plan of the culprits, Seema was waiting for a chance when to take the boy to the neighbourhood park alone. On April 24 she got this opportunity. She took the boy out on the pretext of playing with him. Krishan and Anu Begam arrived in a car. The trio then escaped with the boy.

For the first night, the accused kept the boy at their rented accommodation in A Block in Nangli Rajapur at Sarai Kale Khan. They had arranged this room on April 22 with the plan in mind. They vacated this room the next day to give the cops a slip. The infant was then taken to Faridabad. The second night they spent at another rented house in Tilpat village in Harkesh Nagar area of Faridabad from where the boy was rescued.

The accused had hired the room at Sarai Kale Khan for Rs 4000. The rent was given in advance to the landlord. To mislead him the culprits told him and other neighbours that Ishaan was suffering from cancer in his leg and they had hired the room to keep him there after treatment. Krishan the mastermind behind the kidnapping was posing as Ishaan's father and Anu Ara Begam as his mother. Seema had become his maternal aunt.

The Faridabad house was hired for Rs 1000.

A senior police official said that the miscreants had hired an Indica car from Maharani Bagh to take the boy to Sarai Kale Kahn. "Police will record the statement of the cab driver as it will be useful in the case. The driver will be a witness," said the official.

The official also said that though they had known that the kidnappers were first-timers, they were prepared for a gun-battle. "Police were ready to face them if the accused were to use firearms. Luckily they did not have any such weapons as they are not professional kidnappers," he said.

On Tuesday, around noon, police arrested Ashok Kiro from south Delhi. Eight hours later Krishan Dev Kumar was nabbed from Maharani Bagh. Krishan Dev was working at a businessman's house in the area as an electrician. "He did not flee from the locality after the kidnapping. He thought that if he would go missing, it might attract suspicions," said a senior police official.

Umesh Kumar Gupta, a social activist who has been running an NGO Bachpan Bachao Andolan (BBA), alleged that Delhi Police takes action only when a child of a VIP or a big businessman is kidnapped. He said that cops don't act swiftly if the case pertains to a poor family. Speaking to MiD DAY, Delhi police PRO Rajan Bhagat refuted the charges and said that police take action on each case, without any prejudices. "In a recent case in Nand Nagri, a man was kidnapped and the kidnapper had demanded ansom of Rs 1,000 from his wife. Police acted swiftly and arrested three persons. The man was rescued safely," said Bhagat.   "All cases are equal for Delhi Police," he added.

The accused had also changed the boy's appearance. They made him wear a girl's clothing and bangles so that no one could recognise him. Commissioner Gupta said that they did that to avoid public gaze as the photo of the boy had been circulated in nearby areas and cops were running a door-to-door search near Sarai Kale Khan.

For about a month Pratima had been working with the child's family as a part-time domestic help. She left the job on April 20 and went to her native place in Orissa. The family badly needed a full-time maid. They had told all the guards of Maharani Bagh area about this. Meanwhile, Seema alias Savita Kerketta approached the family and was employed by them without getting her verification done by the police. She was told that she would get Rs 6000 per month to look after their baby Ishaan.  Gayatri, Ishaan's mother, told media persons that Seema looked quite innocent and she trusted her.

Seema came in contact with Pratima in March this year. Pratima introduced her to Anu Ara Begam who ran a placement agency with Krishan in Khijrabad area. Ashok Kiro another accused is Pratima's fiance.

Promoted
Listen to the latest songs, only on JioSaavn.com
"All the accused - Pratima, her fiance Ashok, Anu Ara Begam and her close friend Krishan - thus assembled together and hatched a conspiracy to kidnap Ishaan. Pratima had told them that if Ishaan was kidnapped they could extort a large sum from the family easily. They only had needed a maid for the plan to succeed and so they roped in Seema with them," said the police official.

According to police records, on an average five children have gone missing on every day of 2011 so far. Figures with Delhi Police show 120 children have disappeared across the city in the first 22 days of the year, most of them aged between four and 16 years. Delhi Police maintains there is no organised gang trafficking children but voluntary groups say children are abducted from Delhi to be forced into begging, prostitution, bonded labour and illegal adoption. The police have failed to put a cap on these figures despite having the maximum number of police stations in a mega-city in India, a missing children squad, technology and support of several other agencies.
Comments
ishaanDelhi kidnappingkidnapped delhi toddlertoddler kidnapped by maid