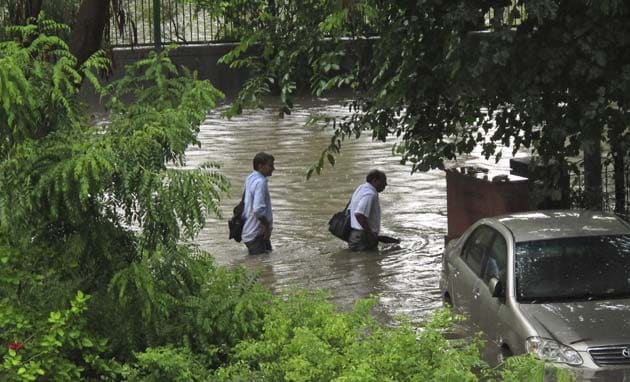 New Delhi: Heavy rainfall lashed Delhi on Saturday flooding almost all arterial roads in the city and throwing traffic out of gear. Roads in and around Delhi were flooded as drains overflowed within an hour of the showers which began shortly after 11 am.

The national capital received 105 mm of rain during the day, one of the heaviest spells in the last 10 years, according to the Meteorological office.

Massive traffic jams were reported in almost all areas due to water-logging as well as non-functional traffic signals. Bumper-to-bumper traffic was witnessed at major intersections such as ITO, Laxmi Nagar, Moti Bagh, Kashmere Gate, Munirka, Dwarka and Dhaula Kuan. Several vehicles also broke down in the middle of the road due to the water-logging. Trees were uprooted in some parts of the city causing disruption in power supply. (See pics)

Heavy rains flooded the arrival area of the Indira Gandhi International Airport, causing inconvenience to the passengers coming out of Terminal 3. (Pics: Delhi airport's T3 flooded again) Flight operations, however, remained largely unaffected. Northern Railway services were, however, hit as 13 trains which were to pass through Delhi got delayed due to flooding at some stations.

There were also reports of flooding at some of the metro stations. The Malviya Nagar Metro station was closed for 15-20 minutes after water-logging.

As rains drenched Delhi, commuters had a hard time in most parts of the city as visibility also dropped slightly. Pedestrians were seen wading through streets flooded by overflowing drains.

"It took me 40 minutes to reach the Akshardham metro station from my home, a distance which I cover within five minutes every day. Traffic was moving very slow," said Ridhi Chouhan, who works at a private bank in Noida. (Share your pics)

"I had to shell out Rs. 180 (for an auto) from my home in Munirka to my office at Connaught Place today. On normal days, the fare is not more than Rs. 100," said Ashok Ojha, who works at a telecom company.

"Water has entered my house and the drawing room is almost flooded," said Ranjana Narayan, resident of Sarojini Nagar in south Delhi.

Promoted
Listen to the latest songs, only on JioSaavn.com
The Met department has forecast more rains in the city on Sunday.