Shaheen Bagh: The protest against the Citizenship (Amendment) Act has been going on for over two weeks and also at a time when Delhi recorded its second-coldest December in 118 years 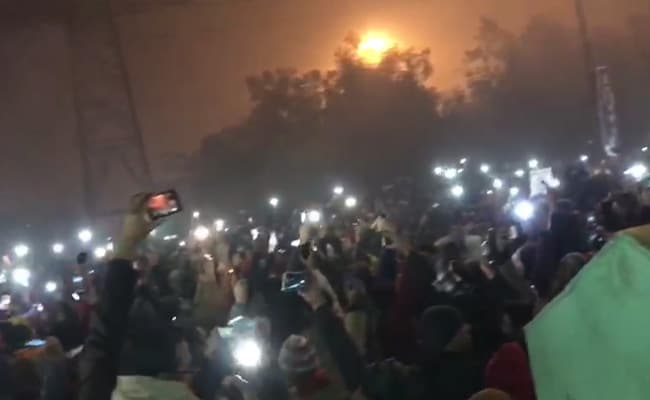 Hundreds of people in south Delhi's Shaheen Bagh ushered in the New Year, amid the biting cold, with a protest against the amended citizenship law that fast-tracks the process of giving citizenship to persecuted non-Muslims from three neighbouring countries.

The protest, mostly led by women, has been going on for over two weeks and also at a time when Delhi recorded its second-coldest December in 118 years. Some women brought their children along to the protest site, where people are huddled into tents amid a pile of blankets.

"I can see that my kids don't have a future. As a mother, to save their future, I am out here protesting. Our rights should be given to us. And this is not just my fight. It's about saving the Constitution too. A lot of Indians across the country will face problems due to lack of documents," Saima, 33, told NDTV as she gives a glass of milk to one of her children. She says she will put the children to sleep before she steps out in the cold to go to Shaheen Bagh. It's the first time she has taken part in any protest.

Other women who can't leave their children home bring them. "I graduated from Jamia in 2014 in Political Science. There is no discrimination at Jamia based on religion... For the first time such an incident has taken place and I am strongly against it," says Sajida Khan, 24, who came with her one-year-old daughter.

Locals contribute by bringing food for the protesters. Collection drives for blankets and other essentials are being run on Twitter.

Asma Khatun, 90, says she has been sitting at Shaheen Bagh everyday from 3 pm to 9 pm. "We are fighting for the Constitution and for all our brothers. I want to tell those who ask me for proof, show me what were the names of your ancestors? I can show you the names of my last seven generations who have lived here," she says.

Several people were seen waving the national flag at Shaheen Bagh on the last night of 2019 on Tuesday. Others came with placards against the Citizenship (Amendment) Act.

As the clock struck 12 and the New Year began, the crowd sang the national anthem, followed by the slogans, "inquilab zindabad (long live the revolution)", news agency Press Trust of India reported.