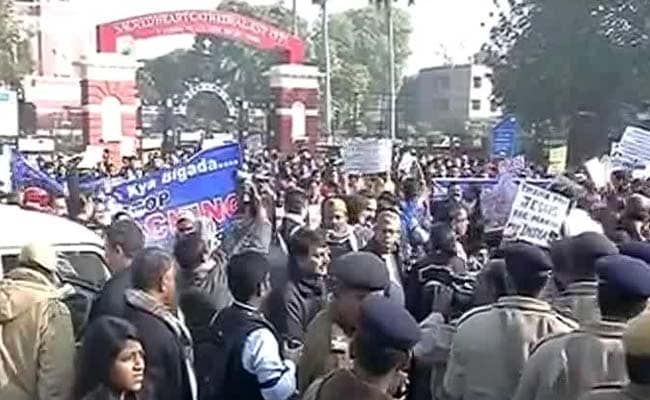 A large number of policemen today swooped down on a protest in Delhi against attacks on churches, and dragged activists, including priests, into buses.

The protest outside the Sacred Heart cathedral in the heart of the city was "unlawful", said the police, who were seen pulling women and even children, leaving bags and shoes scattered on the road.

Father Dominic Emanuel, the spokesperson of the Delhi Catholic Archdiocese, was also forced into a bus.

"What kind of justice is this? Shame on the police. The Prime Minister speaks on everything, why not on this?" said one furious priest, questioning overzealous action on what was meant to be a peaceful protest.

An elderly woman activist, who lay on the road, was picked up by four policewomen and bundled into a bus.

A disproportionately large number of policemen outnumbered protesters outside the church. The commotion caused traffic jams in one of the busiest commercial areas in the capital, not far from top government offices, the Parliament building and ministers' homes.

"The people are being detained. They have no permission to protest on the road. They can't just march to the home minister's residence. We have to protect the residence of VIPs," said senior police officer Mukesh Kumar Meena. He admitted there were no prohibitory orders in place.

Activists, some of them holding crosses and rosaries, chanted "We want Justice" and held up posters that said: "Stop violence against Christians."

Christian groups had organized a silent march to highlight what they called lack of serious action in recent attacks on churches. They said they would march to Home Minister Rajnath Singh's residence.

There have been five attacks on churches since December.

In the latest incident earlier this week, the St Alphonsa's Church in south Delhi's Vasant Kunj was vandalised. The police called it robbery.

Promoted
Listen to the latest songs, only on JioSaavn.com
A church in west Delhi's Vikaspuri was vandalized last month. The police said three men caught on camera and arrested were drunk and attacked the church on a dare.

Some Christian groups suspect a pattern of orchestrated attacks, and say the police are undermining them.