AAP leader Ashutosh, spokesperson Dilip Pandey and more than 10 volunteers were injured when they tried to march towards Parliament, the party claimed. 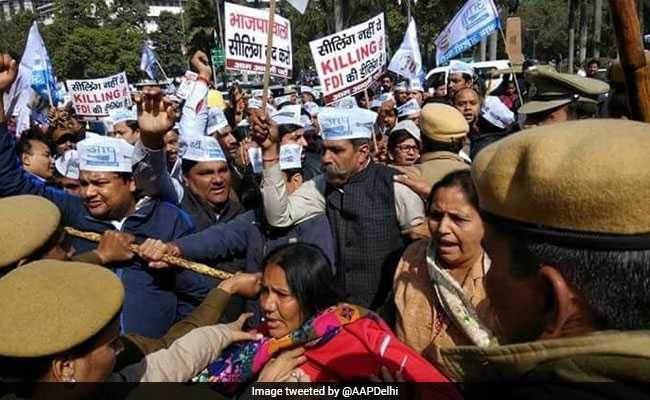 A senior police officer said the AAP did not have permission to protest.

New Delhi: The AAP today alleged party leaders and volunteers were injured in an "unprovoked" baton-charge by police when they were protesting at Patel Chowk over the ongoing sealing drive by civic bodies.

AAP leader Ashutosh, spokesperson Dilip Pandey and more than 10 volunteers were injured when they tried to march towards Parliament, the party claimed.

"The baton-charge was totally unprovoked. Many of our volunteers were injured," Mr Ashutosh said.

A senior police officer said the AAP did not have permission to protest, especially at a time when prohibitory orders are in place in view of the Parliament session.

He refuted the charge that police used force against the protesting AAP leaders and volunteers, who were later detained.

Municipal corporations in Delhi have undertaken the sealing drive initiated by a Supreme Court-appointed monitoring committee.

Commercial premises have been sealed for failing to deposit conversion charges according to provisions in Master Plan 2021.

AAP's Delhi unit convener Gopal Rai said the party had demanded that the conversion charges be waived, but the BJPruled MCDs had turned it down.

Promoted
Listen to the latest songs, only on JioSaavn.com
"The AAP tried to gherao Parliament. But the way the police baton-charged ... A number of people were injured and many taken into police custody. The BJP is using force to crush protests," Rai alleged.

In Parliament, the AAP boycotted the President's address over the sealing drive, disqualification of 20 of its MLAs and the Centre's decision to relax FDI norms.