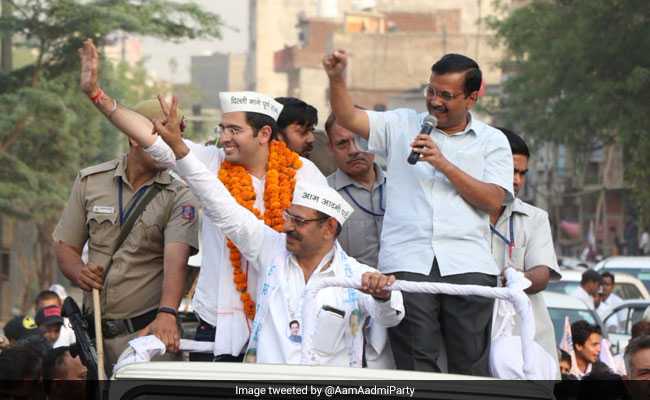 Sanitation, lack of employment options, unauthorised colonies, law and order problems, migrant population are some of the issues plaguing the northwest Delhi constituency, which has the largest number of voters but the least number of candidates in the fray.

The constituency, which came into existence in 2008 because of the implementation of the recommendations of the Delimitation Commission of India constituted in 2002, is a reserved seat.

The constituency comprises large rural belts where locals rely on dairy farming and traditional farming and has three types of residents - original habitants who rely on farming, migrant population, comprising rickshaw pullers and industrial workers and the set of people who reside in housing societies that have sprung up in the last few years in Rohini.

The problems faced here by locals are multi-pronged. Migrant labourers rue the lack of employment opportunities and education facilities for children, those residing in housing societies speak about the incidents of street crimes while the rural population istrying to adopt a affluent lifestyle, even if it means selling off their lands and youngsters taking to crime.    No wonder then, it is one of the most crime-prone areas.

However, Gaurav Sharma, Deputy Commissioner of Police (Outer North) said, "We are very hard on supply of liquor and on criminals using firearm. There has been a heavy crackdown on bootlegging and drug peddling. As a result of our effort, incidents of robbery have declined by 45 per cent."

The rural population rued about the lack of sanitation facilities which also mean that there is a threat to women when they step out to attend nature's call, which is either early in the morning or late in the evening.

Ram Bahadur, a resident of Badli village said, "There are several open fields here and few public toilets. Many people defecate in the open while public toilets see long queues. People can't be standing in queues when they also have to earn so there is open defecation near the Badli canal.

"On the other hand, Umesh Sharma, a media professional residing in Sector 14, Rohini, said, "There is a problem of clean water and the frequency of water supply is also bad. Many a times, the water we get through taps is not even fit for cooking. Without having an RO system at home, you cannot even drink water. Roads are not in good shape while there is a problem of snatching of mobile phones and chains." The northwest Delhi also comprises two industrial areas-- Narela and Bawana-- home to thousands of factories and where lakhs of people from Uttar Pradesh, Rajasthan, and Bihar are employed.

Mukesh Agarwal, treasurer of Shyama Prasad Mukherjee Industrial Welfare Association, Bawana, said, "Bawana is home to almost 16,000 small and big industries but there is no proper connectivity with the highway and trucks have to pass through small lanes in villages.

There is not even a dispensary where we can take a factory worker in case of a mishap. The nearest hospital is in Rohini's Sector-15 which is 15 kilometres away and one has to face heavy traffic to reach there."

He said the AAP government has not done anything for the welfare of factory workers and they are more inclined to voting for a party that has done at least some work at the national level, if not at the local level.

A factory worker, Ramesh, said there is no access to clean drinking water which is the bare minimum they need.

Neeraj, a resident of Rohini, said, "There has been no development in the last five years under the BJP. Rural areas continue to be dirty with people having to defecate in the open. The rural population is also facing other issues as in the absence of proper resources, their children are resorting to crime. There has also been the issue of sealing in industrial units which has affected the jobs of several workers."

A migrant from Bihar, Manoj Kumar, who plies a rickshaw said, "The Delhi government only takes steps for e-rickshaw drivers but nothing for us. I live in a small room for which I pay Rs 2500 and I have to pay Rs 50 as rent per day for the rickshaw. I had recently bought a rickshaw for Rs 10,000 but it was stolen. I had come to Delhi for better employment opportunities but survival here is quite difficult."

The reserved seat has only 11 candidates in the fray and will mainly see a triangular contest between BJP's Hans Raj, Congress' Rajesh Lilothia and AAP's Gugan Singh in election scheduled for May 12.    Punjabi singer Hans has replaced the incumbent MP Udit Raj, who after being denied ticket, had joined the Congress.

Hans said he will ensure "social justice and social security" if elected as MP of the constituency.

He also listed mechanised clearing of sewers to stop deaths due to manual scavenging as his priority. Congress' Rajesh Lilothia said, "My priority will be women's safety and empowerment. The AAP government and Modi government had made huge promises about women's safety but failed to deliver."

"Construction of toilets for people in rural areas where there is open defecation, solving problems of farmers since the constituency comprises large chunks of rural areas and generation of employment opportunities, will be among my key focus areas," he added.

AAP's Gugan Singh said, "My aim is to bring Delhi on the list of priority areas where development takes place. Right now when I look around northwest Delhi, I see only problems. I want to initiate development works in the national capital so that people of the constituency also get proper education and health facilities. I willalso promote the cause of full statehood for Delhi."