"Done My Bit, It's Your Turn Now": Gautam Gambhir Tweets On Voting Day

Lok Sabha elections 2019: BJP's East Delhi candidate Gautam Gambhir tweeted to say he has done his bit and "it's your turn now" 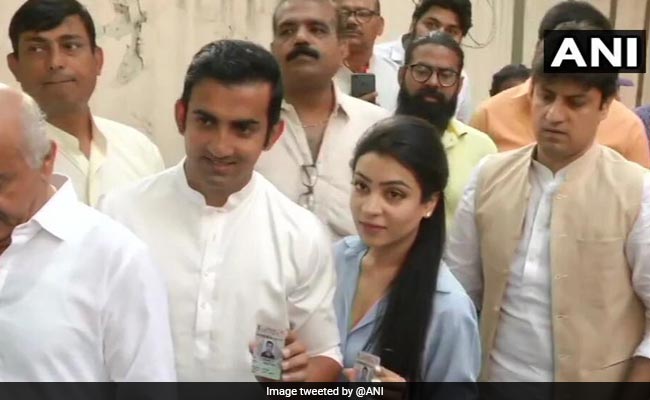 Former cricketer Gautam Gambhir, who is contesting on a BJP ticket from East Delhi constituency, was among the early voters today as the national capital's turn came to participate in the Lok Sabha elections on the sixth round.

"Done my bit !! It's your turn now.. Go Vote Delhi," Gautam Gambhir, 37, tweeted along with a photo of himself - in a crisp white kurta - and his wife Natasha Jain holding their voter cards as they stood in a queue at a polling booth on Old Rajendra Nagar.

Gautam Gambhir's main rival in East Delhi seat is the Aam Aadmi Party's Atishi, who has accused him of circulating severely derogatory pamphlets that attacked her personally. The BJP candidate denied the allegations and responded with a defamation notice, to which Delhi Deputy Chief Minister and AAP leader Manish Sisodia also shot a similar counter-threat.

In the weeks before voting day in Delhi, Atishi and Gautam Gambhir's battle intensified as the AAP sought his candidature's disqualification on allegations that the former cricketer was registered as a voter at two different places in the national capital. Gautam Gambhir had hit back, saying he only has a single voter identity card from Rajendra Nagar.

The Congress has fielded Arvinder Singh Lovely from East Delhi.

Gautam Gambhir joined the BJP in March when the party was yet to announce the names of several candidates. "It is a significant induction," Union Minister Arun Jaitley had said.

The former India opening batsman retired from cricket in December after a 15-year stint. He runs a community kitchen, besides appearing as a commentator.