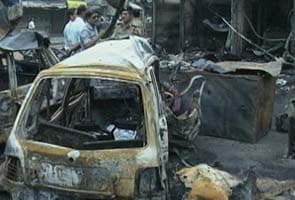 New Delhi: Sixteen years after a powerful bomb blast killed 13 people in the Capital, the Delhi High Court today let off two convicts sentenced to death and reduced the death penalty of the third to life imprisonment. The court said its verdict was forced by the Delhi Police's shoddy investigation in the case.

The high intensity blast at Delhi's popular and perennially overcrowded Lajpat Nagar market on May 21, 1996 was triggered by explosives packed in a stolen Maruti car. Thirty eight people were injured in the terror attack.

A city court had in April 2010 convicted six alleged militants of the Jammu and Kashmir Islamic Front (JKIF). Three of them - Mohd Naushad, Mohd Ali Bhatt and Mirza Nissar Hussain - got death sentences while the fourth, Javed Ahmed Khan, was punished with life imprisonment.

Today, the court converted Naushad's death penalty to life term, acquitted Hussain and Bhat, and upheld the life sentence given to Khan. But not before giving the Delhi Police some tongue-lashing.

Promoted
Listen to the latest songs, only on JioSaavn.com
The police showed "casual approach in the case", the court said. "The police has not maintained a minimum standard of probe. The test identification parade was not conducted and the statements of key witnesses were not recorded," the bench said.

The two other convicts in the case, Farooq Ahmed Khan and his accomplice Farida Dar, had been held guilty by the trial court under the Explosive Substances Act and Arms Act. They were sentenced to imprisonment for seven years and four years and two months respectively.