Fatima Ahmed was participating in a protest by JNU students held near Delhi's India Gate.

New Delhi: Police dragging away the mother of Najeeb Ahmed - the missing student of Delhi's prestigious Jawaharlal Nehru University - became the abiding image of the day, widely shared by indignant social media users as the cops cracked down on a students' protest near India Gate this evening. Najeeb's mother, sister and many of the students were later detained by the police.

Fatima Ahmed was participating in the protest held by JNU students, angry at the failure of authorities to trace Najeeb who had gone missing last month. Ms Ahmed from Badaun in Uttar Pradesh has been camping in Delhi since last month following a frantic phone call from her son on the evening of October 14. The day after, it was found that the Biotechnology student had gone missing. The Delhi Police, which had blocked all roads leading to the area since afternoon, has denied that anyone was manhandled.

"No one has been manhandled and no force has been used against anyone," said Deependra Pathak, Joint CP, South West Delhi, adding that a few protesters were removed and taken to the police station and have been sent back to their destinations including Najeeb Ahmed's mother.

Police say the permission for the protest was not granted and that Section 144 was imposed in the India Gate area because of the festival of Chhat Puja. He said despite that people had gathered near India Gate in small groups and did not cooperate with the police when persuaded against a protest.

The protest comes days after Delhi Chief Minister Arvind Kejriwal and other leaders of the opposition parties visited the university during a protest regarding the missing student. There, in his address to the students, Mr Kejriwal had said "Let's sit on a protest at the India Gate".

Today, Mr Kejriwal went to the police station after Mrs Ahmed was detained and tweeted:

Reached Mayapuri police stn. Police saying she has been sent home in a police van. Will wait here till she reaches home

Earlier today, Mr Kejriwal said he had also met President Pranab Mukherjee regarding the missing student. President Mukherjee, he said, has promised to seek a report from the Home Ministry

Met Hon'ble Prez to seek his intervention on missing JNU student Najeeb. He assured of all support n that he will seek report from MHA n JNU

After the meeting, Mr Kejriwal told reporters that the police did not take any action in the matter due to "political pressure".

"People who were involved in the brawl with Najeeb were questioned by the police yesterday, 22 days after he went missing. That was also a formality," news agency Press Trust of India quoted him as saying. 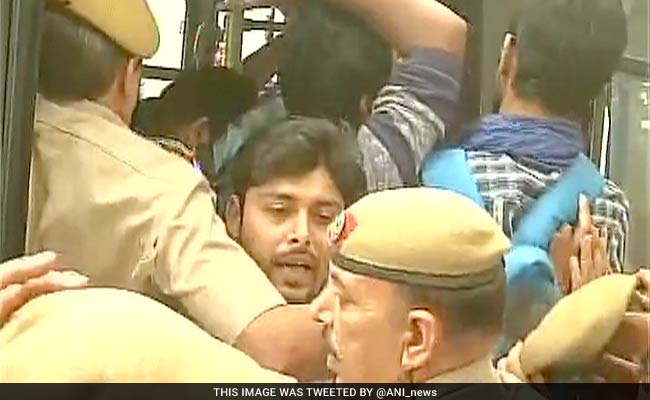 Many of the JNU students protesting at India Gate were detained by the police.

The students say Najeeb had gone missing after a brawl at his hostel. The Left-linked All India Students Association has alleged that before he vanished, Mr Ahmed was beaten up by activists of the Akhil Bharatiya Vidyarthi Parishad, which is linked to the ruling BJP. ABVP has denied any involvement in his disappearance.

Promoted
Listen to the latest songs, only on JioSaavn.com
The students have accused the University authorities of not doing enough to trace him. Last month, protesting students had kept the Vice-Chancellor, Rector and other University officials confined in the administrative block for the whole night, demanding that they take action to trace Najeeb.

The police have launched the largest manhunt in Delhi in recent times, with 450 personnel on the job. They have also announced a reward of Rs 2 lakh for any information on Najeeb Ahmed.