Gun, Threats, Abuses At Delhi Five-Star Hotel: How It Happened

Gaurav Singh and his friend were having dinner at Hyatt Regency when she told him she had to go to the washroom as she wanted to vomit. 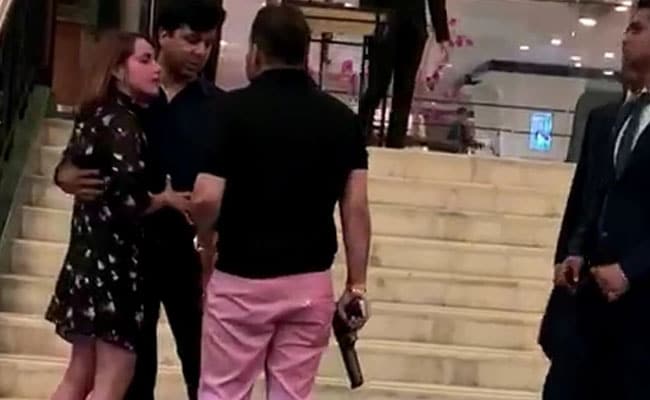 Ashish Pandey - walked towards Gaurav and showed him his gun and said, "I will kill you".

Ashish Pandey, the son of a former Bahujan Samaj Party (BSP) lawmaker, has been missing since he was seen in a mobile video waving a gun, abusing and threatening a man and his woman friend at Hyatt Regency in Delhi on Sunday. Kanwar Gaurav Singh, who was threatened by Pandey, has detailed in his police complaint what went down on Sunday night; only a few minutes have gone viral on social media.

Gaurav Singh and his friend were having dinner when she told him she had to go to the washroom as she wanted to vomit. He went with her and held the door since there was no help inside the washroom.

Inside the washroom, the three women abused his friend and screamed at her. When she came out, she felt scared and started crying. The two decided to leave the hotel without finishing dinner.

At the foyer, where they were waiting for their car, the women from the washroom started abusing them. Four men joined them.

Gaurav says it was then that the "man in pink pants" - Ashish Pandey - walked towards him and showed him his gun and said, "I will kill you".

He says the women showed his friend the finger, and she reciprocated.

Ashish Pandey again stormed to the woman and threatened her, holding the gun. He was dragged  back by one of his women friends and a security man.

He got into his BMW car. Three women sitting in the car laughed, abused and jeered at Gaurav and his friend. The car drove off.

Yesterday, the police filed a case charging Pandey under the Arms Act after examining the mobile footage that has been widely shared online.