Diwali 2019: Manoj Tiwari tweeted a video in which he was seen lighting earthen lamps and bursting firecrackers with a group of people. 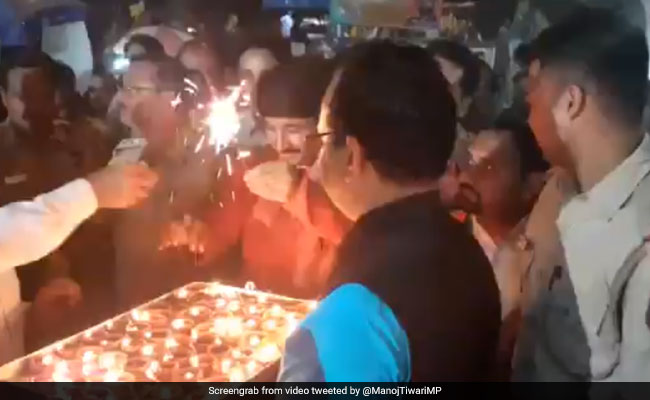 Diwali 2019: Manoj Tiwari, seen in this screengrab from a video he shared, celebrates Diwali

As per the instructions of the party's central leadership, BJP leaders including MPs celebrated Diwali on Saturday in the city's unauthorised colonies that are set to get legal status soon.

Mr Tiwari tweeted a video in which he was seen lighting earthen lamps and bursting firecrackers with a group of people.

Gautam Gambhir, former cricketer and East Delhi MP, also celebrated Diwali with the people in a colony in his constituency.

"Diwali has become very special for 40 lakh people thanks to the decision taken by the Central government to regularise the illegal colonies of Delhi. On the occasion of this happiness, I met people in East Delhi, wished Diwali and light a lamp!" he tweeted.

"Celebrated Diwali in Patel Nagar Vidhan Sabha with North MCD karamcharis. Our team lit lamps in Faridpuri area of this ward. Grateful to PM for bringing smiles to so many needy people. Our efforts became successful with the regularisation of illegal colonies. Everything is possible under Modi's rule," the MP tweeted.

West Delhi lawmaker Parvesh Sahib Singh was in an unregularised colony in Sagarpur Shivpuri area to celebrate the festival.

Taking to Twitter, he said: "Wished happy Diwali to everyone at Sagarpur Shivpuri and congratulated people on passing the unauthorized colonies of Delhi by Modi ji. The Prime Minister has given a gift to 40 lakh people living in these colonies on the occasion of Diwali. People are thrilled."

South Delhi MP Ramesh Bidhuri also visited a colony in Prahladpur area to celebrate the festival with the locals.

BJP working president JP Nadda, in a Core Group meeting held at the headquarters in Delhi on Friday evening had asked all ticket aspirants and those who are post holders in the party to convey Diwali wishes to the people of unauthorised colonies.