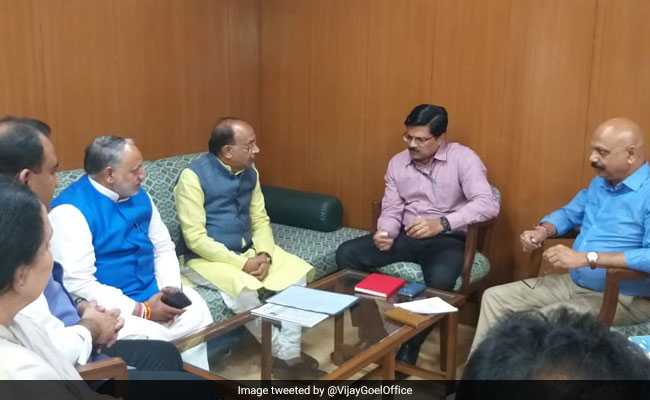 The Delhi BJP alleged AAP has no plan to deal with water crisis in the city.

The Delhi BJP on Tuesday launched a protest against the AAP government over water and power supply in the city.

A party delegation, led by former Union minister Vijay Goel came to meet Delhi Jal Board CEO Nikhil Kumar. The water board headquarters soon turned into a protest venue as the delegation started raising slogans against the AAP government, alleging the utility headed by Chief Minister Arvind Kejriwal had no plan to deal with the water crisis in Delhi.

Mr Goel told news agency PTI that the delegation had "held the CEO captive and he would not be allowed to leave till he promises to organise special camps and issue advertisements publicising its grievance redressal system".

"They have no clue as to how many complaints they have received. They don't have any knowledge about the areas where people have been getting contaminated water or no water at all. They have no plans to resolve the crisis. We have gheraoed the CEO office, we have held him captive and will not let him leave tonight," he said.

BJP legislator OP Sharma said the water board staff had locked the doors on the ground floor to prevent other party supporters from moving up to the CEO's room.

Later, the police were called in as protesters jostled with the water board staff in a bid to force their way into the CEO's office on the third floor.

Delhi Jal Board CEO Nikhil Kumar said the officials have been directed to redress complaints of protesters in the shortest possible time. "I have heard the issues of the people gathered here. Officials have been given strict instructions to redress their grievances in shortest time," he said.

The BJP leaders have been cornering the ruling AAP over power and water supply that it counts among two of its most significant achievements since coming to power in Delhi in 2015.