Delhi violence: Some of the policemen, in apparent anticipation of the much bigger crowd, jump the road divider and run to the relative safety of the other side of the road at northeast Delhi's Chand Bagh

Delhi violence: A group of policemen are seen surrounded by protesters on February 24

A mobile video has emerged showing hundreds of people surrounding a group of policemen and attacking them at northeast Delhi's Chand Bagh at the height of the violence over the controversial citizenship law.

In the video taken from a terrace on February 24, hundreds of people are seen closing in on a group of policemen from two opposite sides on a road littered with stones. Teargas shells are fired. Then the people are seen running away from the police. Within seconds, they return and surround the policemen, who have by now withdrawn to a corner of the road, blocked by a divider.

The mob is then seen overrunning the policemen from all sides and attacking them with sticks and stones.

Some of the policemen, in apparent anticipation of the much bigger crowd, jump over the road divider and run to the relative safety of the other side of the road where the mob had not yet reached. They take cover behind some trees as bricks and stones rain around them. 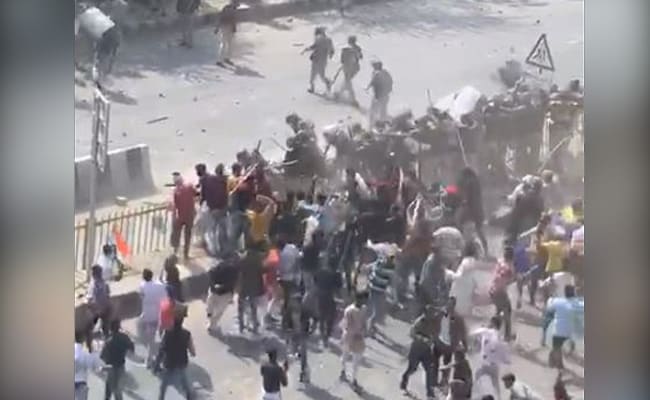 Delhi violence: A group of policemen had gone to northeast Delhi's Chand Bagh to speak with anti-CAA protesters when they came under attack on February 24

Senior police officers Amit Sharma and Anuj Sharma, and head constable Ratan Lal cannot be seen in the video but they were reportedly present in the area. Ratan Lal was killed on the same day.

In another video, an injured senior officer Amit Sharma is seeing being escorted by a ring of policemen on a street as protesters throw stones at them. Then his colleague Anuj Sharma takes him to a house for safety. 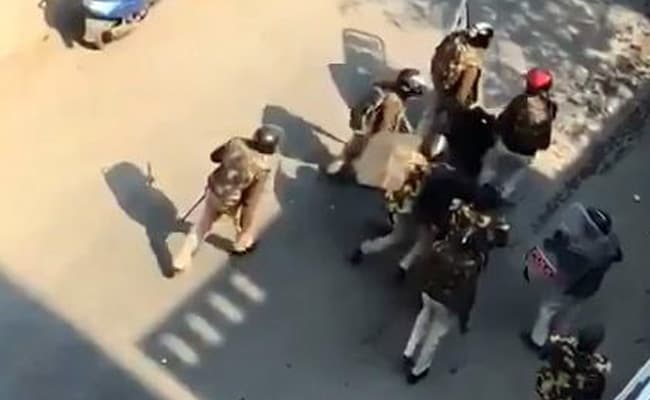 Delhi violence: Delhi Police officer Amit Sharma is seeing being escorted by a ring of policemen

According to some reports, this group of policemen had gone to Chand Bagh to hold talks with people protesting against the Citizenship (Amendment) Act or CAA. The situation, however, went out of control and the policemen found themselves outnumbered by the protesters.

In the video, some women are seen throwing stones at the policemen.

The violence in northeast Delhi that broke out over a week ago between those who supported the CAA and those who opposed it has claimed 48 lives. Houses were burnt, people were shot dead and lynched in broad daylight.

The Delhi Police that is controlled by the Home Ministry was accused of not responding swiftly when the first reports of violence came on February 23 from northeast Delhi neighbourhoods. The violence raged for three more days, even as the centre and the Delhi government appealed for calm.

National Security Advisor Ajit Doval, who reports to the Prime Minister's Office, also stepped in and took rounds of the areas hit by violence.