DUSU Polls 2019: The polling for four positions of DUSU ended amid allegations of EVM malfunctioning. Sixteen candidates, including 4 women, were in the fray and 52 polling centres were set up. 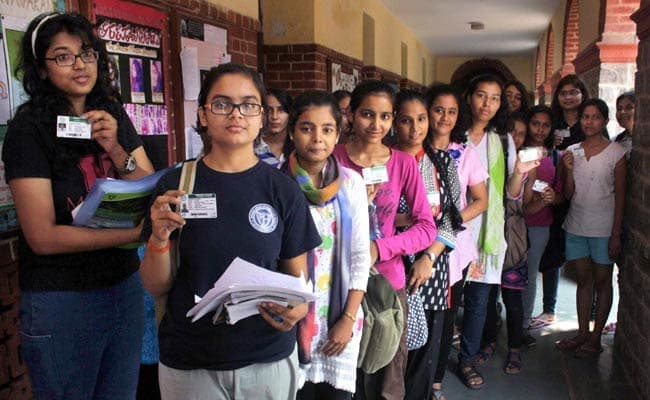 The voter turnout in Delhi University Students' Union polls on Thursday was recorded at 39.90 per cent, over four notches down from the last year.

The results will be declared on Friday. Last year, the election saw a 44.46 per cent voter turnout.

The polling for four positions of (DUSU) ended amid allegations of EVM malfunctioning. Sixteen candidates, including 4 women, were in the fray and 52 polling centres were set up.

The voter turnout recorded across 43 morning colleges was 39.69 per cent, almost four notches down from last year's figure of 43.8 per cent.

Last year, the ABVP had won three posts while the NSUI won one post.

Hot and humid weather, holidays in colleges and disenchantment of students with the politics were cited as reasons for the lower turnout.

Thursday was a declared holiday for students on account of it being election day, so students did not turn up to cast their votes, said some student leaders.

There were long queues to cast votes as Law Faculty, Miranda House and Ramjas College.

In the North Campus, almost 400 police personnel were deployed to prevent any untoward incident, police said.

Sidharth Yadav, State Secretary, ABVP, Delhi, said, "ABVP has won by a landslide in many college internal elections. These are very encouraging signs as far as the impending outcome of the DUSU poll is concerned."

"Despite low turnout, it is a good sign that the outfit has achieved a record mandate in college student union.We have received a good mandate in girls'' colleges, which is a positive sign," said Akshay Laura, Delhi president of NSUI.

Senior Congress leader JP Aggarwal also visited North Campus around 11.30 am to canvass for candidates of the student wing of the party and interacted with young voters.

"#Dusu elections, campaigning in favour of #NSUI candidates at various colleges along with other #Congress member .. #Vote4NSUI #NSUI2311 @NSUIDelhi @nsui," he posted on Twitter.

Outside the colleges and booths, party workers were making last-minute efforts to woo voters and some were also engaging in verbal duel with opposition candidates.

Former DUSU office-bearers from ABVP and NSUI were seen walking through the North campus to gauge the mood of the voters.

The police said Chaprana was canvassing for votes outside the college which was not allowed. When he was asked not to do it, he "misbehaved" with policemen and had to be detained, they said.

The outfit also alleged that an EVM malfunctioned at Aryabhatt college.

Ruchi Gupta, NSUI national in-charge tweeted, "Again, in Aryabhatt college, EVM is malfunctioning as usual AGAINST NSUI. When ballot is pressed for NSUI candidate, EVM does not light up to indicate registration of vote. Our rep is getting more details. "

However, an election committee member said the votes were being cast but there was some problem with the light that glows. The EVM was replaced, he said, adding 152 votes had been cast.

NSUI's secretary candidate Ashish Lamba was not allowed to enter Ramjas College after the ABVP alleged that he had brought some outsiders with him.

The police said that no untoward incident was reported during polling which was peaceful.

At Kirori Mal College in Delhi University, three students, two men and a woman, tried to cast votes a second time by using the IDs of their friends, a college official said.

The disciplinary committee of the college will take a decision on what action to take against them next week, he said.

The Kirori Mal College has also withheld the results of central councillor posts after it was found candidates violated the model code of conduct by putting up huge hoardings, defacing college property and using printed material for seeking votes.

"We received lots of complaints against candidates contesting for the post of central Council posts. The complaints are of gross violation of code of conduct which include defacing of college property, distribution of published material and other goods, displaying of big hoardings etc. The college is very serious on these complaints and the committee will decide the fate of these candidates, " said Dr Rasal Singh, Proctor, KMC.

However, the results for college union were declared by the college.