Delhi Sees 60% Increase In Hospitalisation For Covid In 14 Days

Despite the rise in the positivity rate, the city government has not announced the implementation of the Graded Response Action Plan (GRAP) devised by the Delhi Disaster Management Authority yet.

Delhi has reported a positivity rate of 19.20 per cent, highest in over 200 days.

Hospitalisations in Delhi are up by over 60 per cent since August 1 as the city reports a surge in coronavirus cases with a positivity rate of 19.20 per cent, highest in over 200 days, data show. At least 90 per cent of those admitted have not taken booster shots, according to the Delhi government.

A majority of the admissions took place on Tuesday when the national capital reported 900 cases.

Although cases reported yesterday were lesser in comparison to preceding days - the city reported 1,506 cases on August 2 and 2,495 on August 9, the number of hospitalisations were at 61 per cent of the total cases reported for the day.

Of the 917 cases reported yesterday, 563 people were admitted to city hospitals, and 202 were moved to intensive care unit, or ICU, due to virus-related issues, the data released by the Delhi government show. Three people also died due to the virus, it said.

In comparison, only 20 per cent of the people who were infected with coronavirus were admitted on August 9 when the city reported 2,495 cases and seven virus-related deaths.

Similarly, the percentage of hospitalisations on August 2 stood at 20 per cent of the 1,506 cases reported on the day. However, 105 people of the 341 admitted to hospitals were critical and moved to the intensive care unit, or ICU. 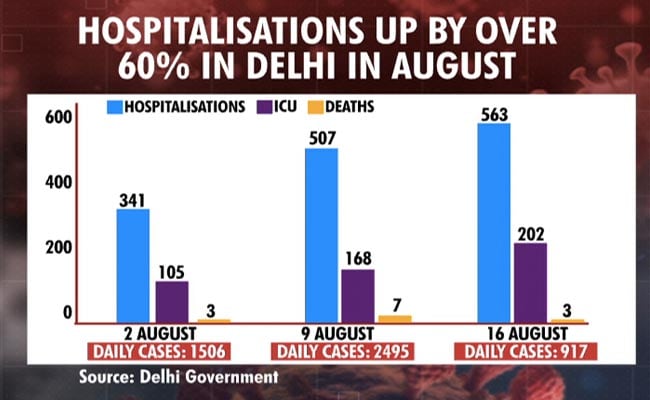 With cases on the rise, officials have urged people to wear masks and observe COVID-19 precautions

Only 500 of the 9,000 beds reserved in city hospitals have been occupied so far, officials told NDTV, adding that nearly 1,800 beds are lying unoccupied in ICUs in these hospitals.

With cases on the rise, officials have urged people to wear masks and observe COVID-19 precautions. "We are witnessing a rise in COVID-19 infections, consistently high positivity and cases of reinfection. It is essential that we realise that the pandemic is far from over. I appeal to all to strictly adhere to COVID Appropriate Behaviour. We cannot afford to let our guards down," Delhi's Lt Governor Vinai Kumar Saxena tweeted.

Public health expert Dr Suneela Garg, a member of the Lancet Commission, told NDTV, "The recovery rate is good, but cases are rising and hospitalisation has picked up. Over 500 (Covid) beds are occupied at the moment of the 9,000. Over 20 of the 2,129 ICU beds are occupied. 65 patients on are ventilation at the moment."

"There is no need to panic, but this is a marker of caution," she added.

Despite the rise in the positivity rate, the city government has not announced the implementation of the Graded Response Action Plan (GRAP) devised by the Delhi Disaster Management Authority yet.

The GRAP came into force in August last year, listing measures to be taken by the government following the positivity rate and bed occupancy for locking and unlocking of various activities.

Delhi reported its all-time high of daily COVID-19 cases of 28,867 on January 13 and a positivity rate of 30.6 per cent a day later during the third wave of the pandemic.