Delhi Weather: The rain brought relief to Delhi amid a humid weather. Minimum temperature settled at 25.1 degrees Celsius, a notch below the season's average while humidity was recorded at 93 per cent. 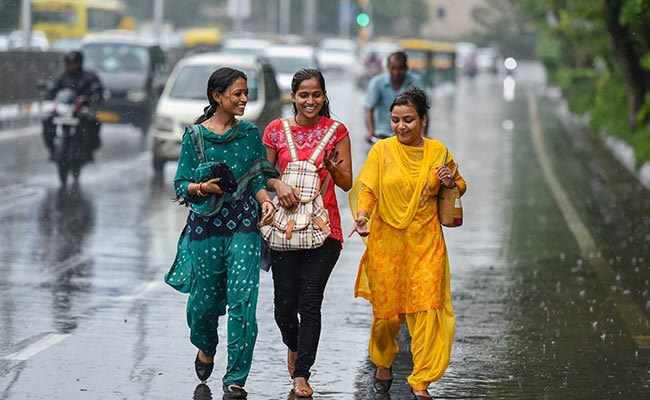 Delhi weather forecast: More rain is in forecast for Delhi throughout the day

Heavy rain hit several parts of Delhi this morning as the sky over the natinal capital remained engulfed in dark clouds with forecast of more rain throughout the day. According to the weather department, the Safdarjung observatory -- the recording of which is considered official for the city -- registered 1.2 mm rainfall between 8.30 am and 11.30 am while Lodhi Road received 0.5 mm rainfall during the same period.

The rain brought relief to the city amid a humid weather. Minimum temperature settled at 25.1 degrees Celsius, a notch below the season's average while humidity was recorded at 93 per cent.

However, the morning shower slowed traffic in major roads across the capital and caused waterlogging in several areas.

The city has received 41.6 mm of rainfall in the last 24 hours, an offficial said.

Delhi and its adjoining areas have received above normal rain in August and has been seeing widespread rainfall since the beginning of September.

The rains have been attributed to the cyclonic circulation over Haryana and adjoining areas, along with the axis of the monsoon trough which is seen in close proximity to Delhi and its suburbs.

The monsoon trough is expected to shift slightly southwards before the weekend and accordingly rainfall activity will also reduce in Delhi.