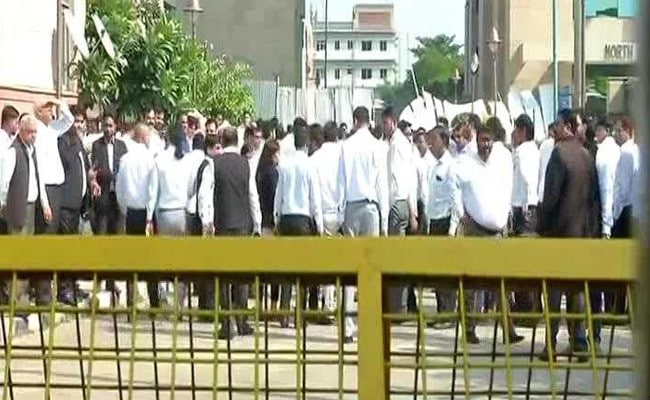 Lawyers of all six district courts are holding peaceful protests.

Litigants were welcomed with flowers by lawyers at the entrance of Saket district court complex on Thursday as advocates abstained from work for the fourth consecutive day, protesting against the clash with police at Tis Hazari court on November 2.

After Wednesday's scuffle with common public and lawyers at Saket court, litigants have been allowed to attend their matters in courtrooms and proxy counsel are also appearing to take dates in cases, advocate D S Kasana, general secretary of coordination committee of All District Courts Bar Associations, said.

"We have also arranged for lunch for around 1,000 people including lawyers and clients. We are protesting peacefully. The private guards of the Bar are taking care of the security today," he said.

"We have not stopped the police from entering the court''s premises and do their duty. They are not coming for their own reasons," he said.

Jaiveer Singh Chauhan, secretary of Delhi Bar Association at Tis Hazari court, said the Bar is handling the security of the court''s premises.

"Lawyers are doing the security checks of the people entering the court. All are welcome. Situation is peaceful here," he said.

Advocate Sanjeev Kumar Ojha, who was part of the protest at Rohini court, said litigants were visiting but they were few in number.