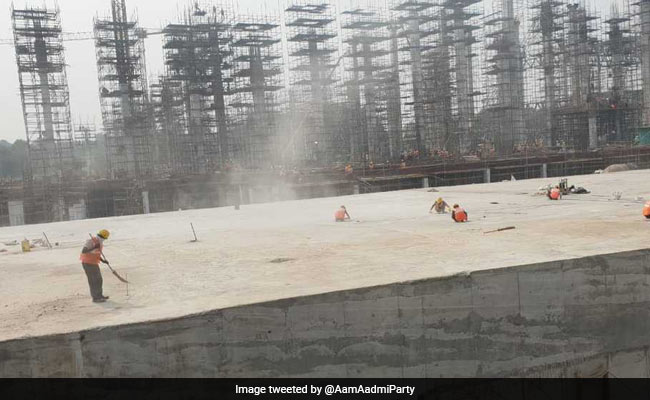 The violations came to light during a surprise inspection by Delhi Environment Minister Imran Hussain.

The Delhi government today told the Delhi Pollution Control Committee (DPCC) to take "strictest action" against the violators at the Pragati Maidan re-development site after finding violations of dust control measures including uncovered stacks of building materials and no arrangement to sprinkle water.

Mr Hussain gave the orders after visiting the site as part of steps to check air pollution in the national capital.

"The team has observed several discrepancies, including blatant violation of Environmental Clearance (EC) conditions, visible clear-cut negligence on part of contractors with regard to construction and demolition," read a statement from the Ministry.

The team found that no steps were taken by the contractors to control emission of re-suspension dust from excavation, drilling and other construction-related activities.

It found that stacks of building materials -- sand and excavated boulders -- were kept uncovered and in a dry condition, causing dust pollution.

"All construction sites were without mat fencing to trap the dust. All mat covering (Green sheets) arrangements were insufficient to mitigate the quantum of dust being generated from the construction sites," the statement added.

The team also noticed that approach and internal roads were full of dust due to non-sprinkling of water and no steps were taken to alleviate the dust pollution from construction happening in the multi-storied residential project.

With deteriorating air quality in Delhi, Mr Hussain on October 23 directed various departments to combat air pollution on a war footing and to take mandated actions under 'very poor' and 'severe' categories of air quality index in the city.

No construction site should be left uncovered in Delhi.

He directed both contractors and PWD officials to take measures for prevention and control of road dust/re-suspension of dust and other fugitive emissions.

The Minister has decided to regularly inspect all areas in Delhi to oversee the implementation of Graded Response Action Plan (GRAP) and visit the sites where there is a likelihood of air pollution.

(Except for the headline, this story has not been edited by NDTV staff and is published from a syndicated feed.)
Comments
Delhi pollution 2018Pragati Maidanaap on delhi pollution