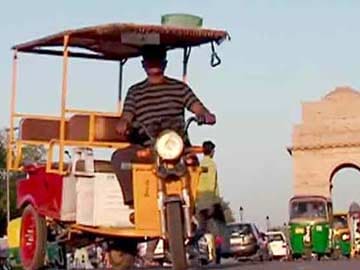 New Delhi: The Delhi High Court today said plying of e-rickshaws in the national capital is illegal as per existing law and the ban on their operation will continue till Central government frames rules to regulate them.

A bench of justices Badar Durrez Ahmed and Siddharth Mridul upheld its ban on e-rickshaws, saying "What is prohibited under the law cannot be permitted".

The bench said it cannot issue a writ of mandamus to legalise what is illegal as per the existing law.

The bench also said "we cannot anticipate legislative changes" and left it to the Central government to frame rules for plying of e-rickshaws.

It said the review petition by Battery Rickshaw Welfare Association against the court's July 31 ban has now become infructuous.

The court's judgement came on the plea of social activist Shanawaz Khan filed through advocate Sugrive Dubey, seeking a ban on e-rickshaws. The plea had said "no person without valid licence be allowed to ply e-rickshaws".

The plea had contended that e-rickshaws had no registration numbers and the vehicles were putting passengers at risk.

In three months, around 200 accident cases, including two fatalities, have been registered, the plea had said, adding that e-rickshaws should not be allowed to ply as they are "high risk vehicles".

The court had on August 29 fixed the matter for order after the counsel for all the concerned parties including the Centre, Battery Rickshaw Welfare Association and petitioner Shanawaz Khan, on whose plea plying of e-rickshaws was banned, concluded their arguments.

During the last hearing, Additional Solicitor General (ASG) Pinky Anand, appearing for the Ministry of Road Transport and Highways, had sought a direction to vacate the court's July 31 order while saying that they have submitted the draft rules before the Law Ministry.

ASG Anand, along with advocates Balendu Shekhar and S N Parashar, had sought that e-rickshwas be allowed to ply till October 15, saying by that time they will be able to bring an amendment in the rules.

The Centre had also placed before the court its proposal of the directions it is seeking from the court to allow plying of e-rickshaws on city roads.

Earlier the traffic police, in an affidavit filed before the court, had raised serious concerns over the accidents involving erickshaws and said that unregulated operation of the battery-operated vehicles tends to cause traffic problems on the roads.

It had also said that as the operation of e-rickshaws is not regulated under the Motor Vehicles Act (MVA), police are unable to prosecute the drivers.

On August 21, the court had refused to pass any interim order to permit their operation.

On July 31, it had banned plying of e-rickshaws on city roads on the plea that alleged that these vehicles which are designed to ferry only four people including the driver, carry more than eight people at a time, endangering their lives.

Promoted
Listen to the latest songs, only on JioSaavn.com
While banning them, the court had observed that e-rickshaws are illegally running on Delhi roads and "prima facie a hazard to other traffic as well citizens".

Thereafter, Battery Rickshaw Welfare Association had sought a review of the high court's order, saying e-rickshaws be allowed to ply on the basis of interim guidelines submitted by the Transport Ministry.