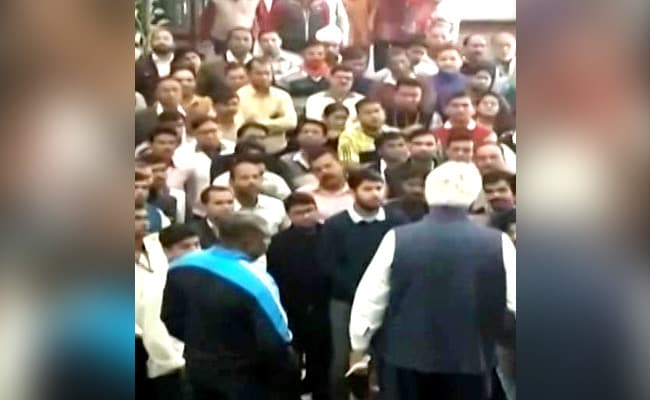 There was chaos outside the Delhi secretariat after Anshu Prakash's allegations of assault.

New Delhi: Delhi Chief Secretary Anshu Prakash alleged that he was manhandled by a two AAP lawmakers at Chief Minister Arvind Kejriwal's home. The chief minister's office has dismissed the accusation as "bizarre and baseless". The alleged incident took place last night in the presence of Mr Kejriwal and Deputy Chief Minister Manish Sisodia. Anshu Prakash was called by Arvind Kejriwal to discuss the issue of advertisements, which were not being released, an official said. However, the Aam Aadmi Party (AAP) claimed he had been called for a discussion on rations. Home Minister Rajnath Singh has sought a report on the incident from Lieutenant Governor Anil Baijal after meeting representatives from civil services associations.

Here are the highlights and reactions on Delhi Chief Secretary's allegations of assault:

Feb 20, 2018 23:12 (IST)
Meghalaya Chief Minister Mukul Sangma on Tuesday said Home Minister Rajnath Singh's comment slamming the state government over "failure" in maintaining law and order was "most irresponsible". Mr Singh had criticised the Sangma government over law and order after NCP candidate in Garo Hills, Jonathone N Sangma, was killed in an IED blast. "It is the most irresponsible comment of the home minister of the nation. Has he forgotten his own responsibility?" Mukul Sangma said in a statement.
Feb 20, 2018 21:30 (IST)
The Indian Civil and Administrative Service (Central) Association in a statement said, "The Central IAS Association strongly condemns the physical assault on the Chief Secretary, Delhi on 20th February, 2018 by MLAs at the CM's residential office in the presence of the Chief Minister of Delhi. It's a criminal, cowardly and deplorable act and amounts to an assault on the Constitutional Administrative Framework of the Country."
Feb 20, 2018 21:29 (IST)
"Keeping public interest paramount and to ensure that there is no disruption in public service delivery, the three Associations of the Delhi Government officers (IAS, DANICS and DASS) have decided today that they will only maintain formal written channels of communication with the political executive, till such time the Chief Minister admits and apologizes for the incident of physical assault on the Chief Secretary," the Delhi IAS Association said in a statement.
Feb 20, 2018 21:28 (IST)
In a statement, the Delhi IAS Association said, "The abhorrent incident involving verbal and physical assault of the Chief Secretary of Delhi at the residence of the Chief Minister... has resulted in a serious breach of trust, and shaken the faith of the bureaucracy in the present political executive of GNCTD."
Feb 20, 2018 16:32 (IST)
"It was a riot-like situation, a crowd had gathered who became violent and even raised slogans. We don't know who they were. Everything is on CCTV, will be clear from it. Police were mute spectators," said AAP leader Ashish Khetan.
Feb 20, 2018 16:27 (IST)
"It was a riot like situation, a crowd had gathered who became violent and even raised slogans, we don't know who they were. Everything is on CCTV,will be clear from it. Police were mute spectators," AAP's Ashish Khetan was quoted as saying by news agency ANI on alleged assault of Delhi Chief Secy Anshu Prakash.
Feb 20, 2018 16:24 (IST)
"If you have already decided who the guilty party is, then what's the point of the probe? As a home minister, you should taken a stance on who's saying the truth, who's lying? Then you should have decided how to conduct the probe. It's sad the country's home minister decided on a probe by only listening to one party. Hope he also listens to us too.": Ashish Khetan at a press conference
Feb 20, 2018 16:01 (IST)
"I am deeply pained by the happenings involving the Chief Secretary of the Delhi government. The civil servants should be allowed to work with dignity and without fear," Home Minister Rajnath Singh said.
Feb 20, 2018 15:42 (IST)
Home Minister Rajnath Singh seeks report on Delhi Chief Secretary's allegation that he was assaulted at Chief Minister Arvind Kejriwal's home last night.
Feb 20, 2018 15:30 (IST)
A meeting between Delhi Chief Secretary Anshu Prakash and Home Minister Rajnath Singh is underway in Delhi, news agency ANI reported.
Feb 20, 2018 14:46 (IST)
Saurabh Bharadwaj: There was no physical assault to Anshu Prakash Ji.
Feb 20, 2018 14:27 (IST)

Chief Secretary Anshu Prakash Alleges Assault At Midnight Meet In Arvind Kejriwal's Home: 10 Points
Delhi's top bureaucrat has alleged that he was manhandled at Chief Minister Arvind Kejriwal's home by two Aam Aadmi Party (AAP) lawmakers after being called to a meeting at midnight to discuss raising the government's ad spend. Chief Secretary Anshu Prakash alleges he was attacked in the presence of the Chief Minister, was "held by his collar" and abused. His glasses also broke, according to the IAS (Indian Administrative Service) officers' association, which has demanded the arrest of the AAP lawmakers. As hundreds of officials protested outside the Delhi government's headquarters, AAP leader Ashish Khetan alleged that he had also been roughed up."
Feb 20, 2018 14:25 (IST)
IAS Officers' Association to meet Home Minister at 3 pm.
Feb 20, 2018 14:18 (IST)
Speaking to reporters after meeting the Lt Governor, the IAS Officers' Association secretary Manisha Saxena said: "(Anshu Prakash) was called alone for the meeting at midnight. The Chief Minister, Deputy Chief Minister and 10-12 MLAs were present."
Feb 20, 2018 14:06 (IST)
Delhi government spokesperson Nagendar Sharma: Minister @ImranHussaain on his way to lodge a complaint at IP Estate police station; MLAs Prakash Jarwal and Ajay Dutt to lodge a complaint with SC/ST Commission against casteist comments against them
Feb 20, 2018 14:05 (IST)
AAP's Ashish Khaitan called PCR (Police Control Room), alleges he was manhandled at Delhi Secretariat. Police has reached the spot.