Arvind Kejriwal and his deputy Manish Sisodia laid the foundation stone of two new campuses at Rohini and Dheerpur Village for the Ambedkar University Delhi (AUD). 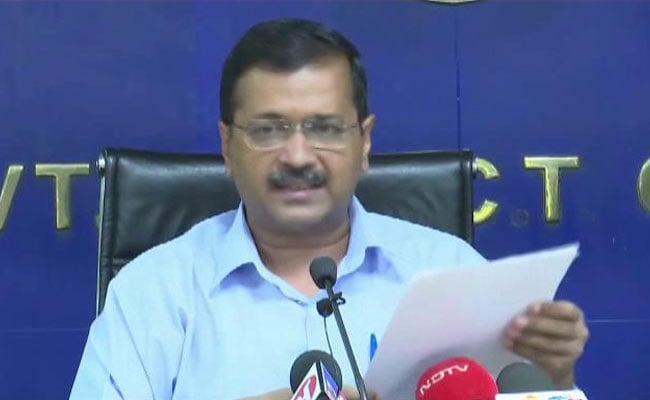 The chief minister said education has been his government's priority.

Delhi Chief Minister Arvind Kejriwal on Friday said the number of seats for higher education has improved to 1.5 lakh from 1.1 lakh since the time the AAP came to power in 2015.

Mr Kejriwal and his deputy Manish Sisodia laid the foundation stone of two new campuses at Rohini and Dheerpur Village for the Ambedkar University Delhi (AUD).

"It is a day of happiness for the people of Delhi as the foundation stones for two large and beautiful university campuses are being laid today. At present, the capacity of Ambedkar University is 3,400, and with the completion of these campuses within the next three to four years, it will be increased to 8,000," Mr Kejriwal said.

He requested the university authorities and PWD to complete the campuses as soon as possible.

The chief minister said education has been his government's priority.

"Our philosophy is that governance will be incomplete if the government fails to provide high quality education to students. There is no developed country in the world which does not have a robust education system. The path for India to become a developed nation is to provide good education to our children irrespective of their socio-economic background," he said.

In order to enable the students to pursue higher education after class 12, the Delhi government provides a guarantee free loan up to Rs 10 lakh for which the government stands as guarantor, he said.

Through this mechanism, the Delhi government has eased the process of securing loans for higher education, the chief minister said.

Students are required to payback the loan in installments only one year after their graduation, over the next 15 years, he said.

"Students after class 12 are looking for courses which can lead to a good job and salary. If the students after graduation are unable to get good jobs, it indicates there is a deficiency in the higher education system. We need to prepare our students for jobs," the chief minister said.

"When we came to power in Delhi, only 1.1 lakh seats were available in colleges in Delhi and that has now improved to 1.5 lakh. Almost 2.5 lakh students pass out of class 12 each year, so a gap still remains and many students have to drop out of education after class 12. We need to cater to one lakh more students," he added.

In order to enable the needy students to get employment, the government is planning for world class skill centres and skill-based courses through which they can be directly taken into the job market, he said.

"The biggest problem in Delhi's higher education is a British-era law called the Delhi University Act, passed in 1922. The British believed that education must be restricted to the elite few in the country," Education Minister Manish Sisodia said.

This Act made the Delhi University the only affiliating institution in the city.

"IP University was granted affiliating powers with a one-time amendment. The Delhi government has the power to create universities but not to affiliate any colleges. This was a provision made when Delhi would produce only 2,000 students every year. Today, Delhi''s schools are producing two lakh students each year. We need to change this law," he said.

"Those who can do this do not seem to have this on their priority at the moment," he said, adding that they have found a way out by opening constituent colleges of the existing universities.

In the last five years, 16 new colleges and constituent colleges have been opened by the Delhi government, Mr Sisodia said.