Manoj Tiwari said he had improvised on the dialogues after taking due permission from the director of the Ramlila. 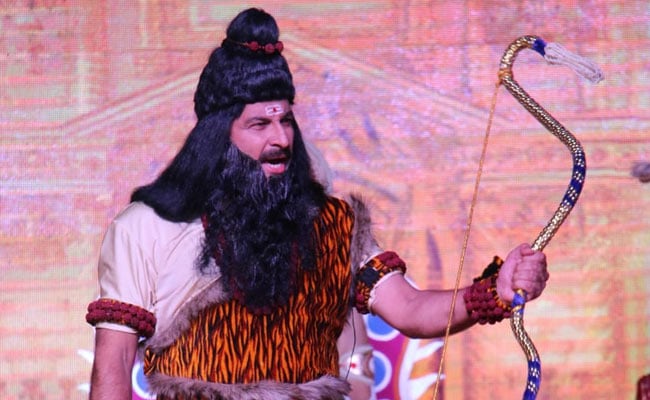 Delhi BJP chief Manoj Tiwari, who played the role of mythological character Parashurama in a local Ramlila, has kicked up a row with his improvised dialogue in which he used the term "foreign infiltrators", which was linked to his demand for an Assam-like National Register of Citizen (NRC) exercise to weed out illegal immigrants from the national capital.

"Janak, there are kings from several countries in our midst. Where has this crowd come from? Have you invited them or are they foreign infiltrators?" Mr Tiwari said in a Hindi dialogue in the play based on the epic Ramayana, one of many organized across north India during Dussehra festival.

In another dialogue, he used the term "aatanki" or terrorists.

Speaking to NDTV, Mr Tiwari said he had improvised on the dialogues after taking permission from the director of the Ramlila.

"The main thing is that the citizens of this country cannot be evicted from any part of India. But we will identify infiltrators, this is our principal," he said.

The Aam Aadmi Party (AAP) has slammed Mr Tiwari for his act. "BJP should at least keep religion out of its cheap politics. If they talk about NRC, they must go to Assam and find out that people from UP and Bihar, who were earning their livelihood there, have been declared foreigners," Rajya Sabha MP Sanjay Singh said.

In the Assam citizens' list published on August 31, 19 lakh people, including 12 lakh Hindus, didn't make it to the list. The ruling BJP has said the exercise will be carried out across the country.

But before this, said Union Home Minister and BJP chief Amit Shah on Tuesday, Hindu, Sikh, Jain and Buddhist refugees would be given Indian citizenship through the Citizenship (Amendment) Bill.

"Didi (West Bengal Chief Minister Mamata Banerjee) is saying she won't let NRC happen, I want to promise you we won't let a single infiltrator stay. Not one refugee will have to go, not one infiltrator will be able to stay, this is the BJP's promise," he had said.

On August 31, when the Assam NRC list was published, Mr Tiwari had demanded a similar exercise for Delhi to identify illegal immigrants.

"The situation in Delhi is becoming so dangerous that it is necessary to have NRC. Illegal immigrants who have settled here are the most dangerous... we will implement NRC when the time comes," he had said.

Delhi Chief Minister Arvind Kejriwal had quipped that if an NRC was carried out in Delhi, Mr Tiwari, who is from Bihar, would be among those to go.