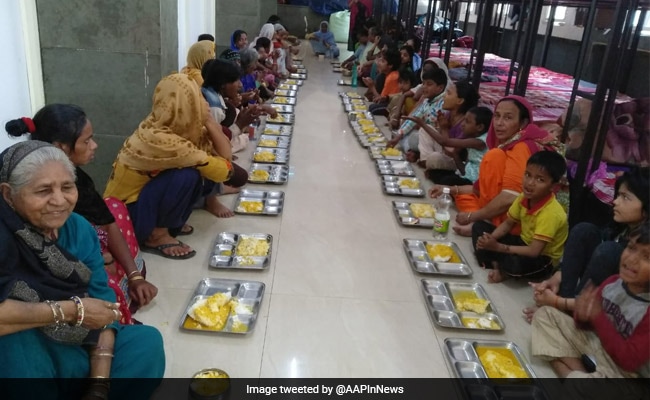 Amid the chaos, fear and uncertainty caused by the novel coronavirus outbreak in the country, Delhi Chief Minister Arvind Kejriwal has offered "free ration (and) doubling pensions" to 72 lakh people in the national capital whose jobs and livelihoods may have been affected by the virus. In his tweet he said the "compassionate gesture (was) essential for our economy to survive".

Delhi has 27 active COVID-19 cases, according to the Union Health Ministry. Five people have been discharged after receiving treatment and one death has been linked to the virus. On Saturday the Chief Minister told people that "if needed, to save your life, we will lock down Delhi".

"We are providing 72 lakh people free ration, doubling pensions. In addition to this, I urge all employers to provide paid leave, including to domestic help. Not only is this a compassionate gesture, it is essential for our economy to survive," Mr Kejriwal tweeted.

We are providing 72 lakh people free ration, doubling pensions. In addition to this, I urge all employers to provide paid leave, incl to domestic helps. Not only is this a compassionate gesture, it is essential for our economy to survive.

"Anyone can walk into these places and have meals. We don't want anyone to suffer due to hunger," he said in another tweet, with photos of people eating.

Anyone can walk into these places and have meals. We don't want anyone to suffer due to hunger https://t.co/1OmV1eeWe7

The Chief Minister also urged residents to stay indoors to help stop the virus and asked that people marked as possible COVID-19 patients, pending tests, not be stigmatised by their neighbours.

"The Delhi government is marking all homes with persons advised to home quarantine. I appeal to all not to stigmatise such families. Please be empathetic and supportive towards them. The marking is aimed only at cautioning others for their own safety," he said.

Delhi has been largely locked down as the ruling Aam Aadmi Party (AAP) tries to contain the virus.

Movie theatres and restaurants were shut earlier, as were educational institutions. On Friday Mr Kejriwal also said that shopping malls would be closed too, with the exception of grocery stories, vegetable shops and pharmacies inside them.

As part of its measures the Delhi government has also begun stamping people who have been advised to into home quarantine, to enable authorities to track those who may try to escape such measures.

The Delhi metro will shut down till March 31, it was announced today.

The outbreak has also led to chaos at Delhi airport over the past 48 hours, as the deadline for the ban on international flights looms large; the government has suspended foreign flights starting tonight.

Meanwhile, across the country millions are observing a 14-hour "Janata (public) curfew" called by Prime Minister Narendra Modi to promote social distancing and check the transmission of the virus.

Medical experts have repeatedly advised that frequently washing one's hands and maintaining a distance from other people is key to preventing infection.

The COVID-19 outbreak in India has infected over 340 people and left at least seven people dead. Worldwide, as per data from the World Health Organisation (WHO), over three lakh people have been infected and more than 10,000 killed.