"New Lease Of Life": 73-Year-Old From Delhi Who Recovered From COVID-19

The 73-year-old, who stays in south Delhi, was admitted to hospital on April 1 after he tested positive for COVID-19. 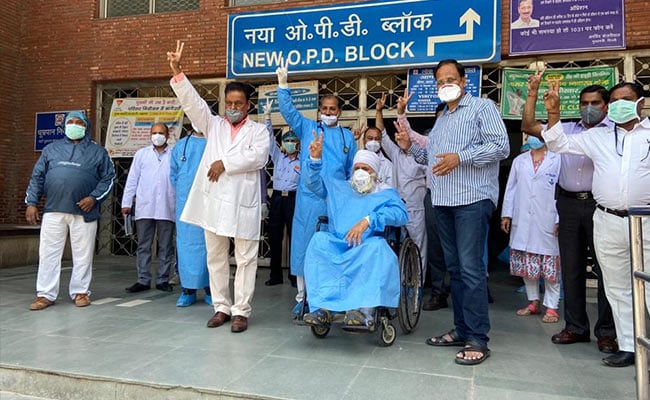 This morning, Delhi Health Minister Satyendar Jain met him at the hospital.

A 73-year-old man in Delhi who was discharged this morning from the Lok Nayak Jai Prakash Narayan Hospital after recovering from the novel coronavirus or COVID-19 today said that strong will power helped him fight the illness that has infected over 4,400 in India, killed more than 100.

"It's like getting a new lease of life," he told NDTV. "Listen to the doctors across the country and make sure that you have a strong will power, your morale stays high," he added as he referred to his journey of recovery.

The 73-year-old, who stays in south Delhi, was admitted to hospital on April 1 after he tested positive for COVID-19. He had complained of difficulty in breathing and high blood pressure. The doctors kept him at the intensive care unit for two days.

This morning, Delhi Health Minister Satyendar Jain met him at the hospital after he was discharged and congratulated him for his recovery.

With 523 cases, including seven deaths, the national capital has reported the second highest number of patients in the country, according to Union Health Ministry. At least 19 patients have recovered so far.

"We have formed a 5-step plan after talking to experts, that how will we control coronavirus in Delhi," he said during a virtual press conference. "This is a '5T plan'," he added. Testing, tracing, treatment, team work and tracking and monitoring are the five aspects of the Aam Aadmi Party government's new strategy.