Jyoti, the accused, is seen following the woman she attacked as the 20-second long clip starts. 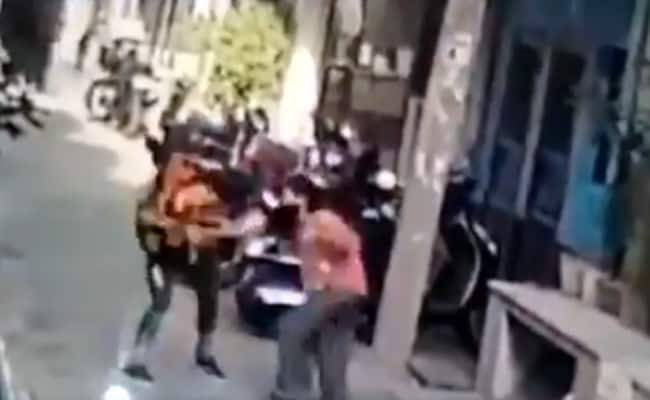 The shocking video shows the woman snatching the mobile phone.

A CCTV footage has helped the Delhi Police arrest a woman who attacked another woman and snatched her mobile phone in the shocking video.

As the 20-second clip starts, Jyoti, the accused, is seen following the woman she attacked. The other woman doesn't notice she is being followed because she is talking on her phone.

Suddenly, Jyoti pulls the second woman from behind and snatches the mobile. The struggle between both of them continues for a few seconds, and Jyoti is then seen badly thrashing the other woman.

The mobile phone falls on the road, and Jyoti then pushes her before casually walking away.

Helpless, the other woman is seen chasing Jyoti at the end of the video.

The entire incident from northwest Delhi's Sultanpuri area was caught on CCTV camera. Jyoti is a resident of Mongolpuri, police said.

Several shocking incidents in Delhi have been caught on surveillance footages. Earlier this month, Delhi Police filed a murder case after a 19-year-old was stabbed to death by four men when he was out to buy cake for his father's birthday. CCTV footage showed the four accused stabbing Kunal multiple times as he tried to escape. The incident took place in South Delhi's Ambedkar Nagar.

In February, a 25-year-old woman holding her child was stabbed to death during a robbery bid in North-West Delhi. The incident was captured by a CCTV camera in the capital's Adarsh Nagar locality.