On Friday, the Delhi BJP protested had near the Congress headquarters demanding an apology from it over the issue. 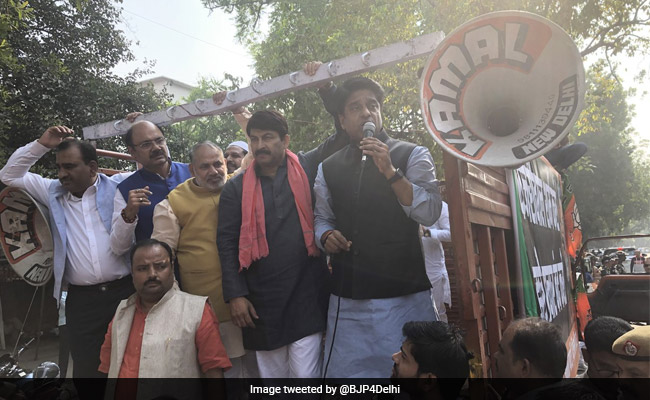 The Delhi unit of the Bharatiya Janata Party on Saturday protested near the Aam Aadmi Party office in Delhi against the "baseless allegations" levelled by the party in the Rafale jet deal, two days after the Supreme Court rejected pleas to review its judgment giving clean chit to the Modi government.

Led by Delhi BJP chief Manoj Tiwari, the party workers raised slogans against the AAP and demanded an apology from it for trying to "malign the image" of Prime Minister Narendra Modi.

On Friday, the Delhi BJP protested had near the Congress headquarters demanding an apology from it over the issue.

It said in a statement it organised the protests against the "malicious and baseless allegations" of corruption levelled in the Rafale deal.

In February, Delhi Chief Minister and AAP chief Arvind Kejriwal had demanded that an "independent" CBI raid the PMO, seize files and make arrests in connection with the controversial deal.

On Thursday, the Supreme Court rejected pleas for a review of its December 2018 verdict in which it had said that there was no occasion to doubt the decision-making process in the multi-billion-dollar deal.

However, a separate and concurring verdict by Justice K M Joseph said the judgment "would not stand in the way" of the CBI from taking action on the complaint for lodging of an FIR.