The AAP also questioned why the Delhi Police refused permission for its demonstrations citing COVID-19 restrictions while allowing those by the BJP.

The BJP workers have been protesting outside the homes of ministers since Monday demanding funds for the civic bodies which they control and had attacked Deputy Chief Minister Manish Sisodia's home on Thursday while the police stood by.

Earlier in the day, Aam Aadmi Party (AAP) leaders Raghav Chadha, Atishi and others were detained while on their way to Home Minister Amit Shah and Lieutenant Governor Anil Baijal's residences as part of their party's counter-protest.

While the BJP claims that the Delhi government owes around Rs 13,000 crore to the north, south and east municipal corporations, the AAP alleges a Rs 2,500 crore-fraud by the opposition party in the civic bodies. 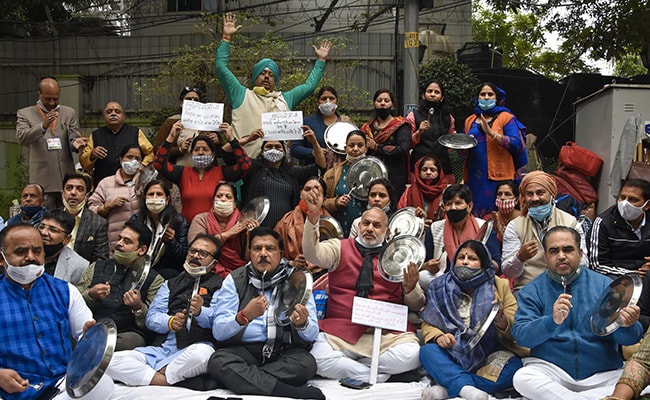 The AAP asked why the BJP was allowed to protest but it was denied permission citing COVID-19 rules.

The AAP, which had planned a protest outside Mr Shah and Mr Baijal's residences asking for a CBI probe into its allegations, questioned why the Delhi Police refused permission for its demonstration citing COVID-19 restrictions while allowing those by the BJP.

On Saturday, mayors and senior leaders of the three BJP-led municipal corporations had continued their picket outside Arvind Kejriwal's residence, shouting slogans and banging plates as a protest. The Delhi Police reports to the BJP-led central government.

On Thursday, the AAP released security camera footage, showing an "attack by BJP goons" on Deputy Chief Minister Manish Sisodia's residence with the support of police personnel while Mr Sisodia was not home but his family was.

Shocking visuals from videos posted online by Mr Sisodia and AAP leaders Atishi and Raghav Chadha showed dozens of men marching up to the Deputy Chief Minister's residence and forcing their way past a handful of policemen as they enter Mr Sisodia's home.