50 Shanties Destroyed In Fire In Delhi, No Injuries

No injuries have been reported in the incident and authorities suspect that a spark in the electricity cables in the shanties could have led to the fire. 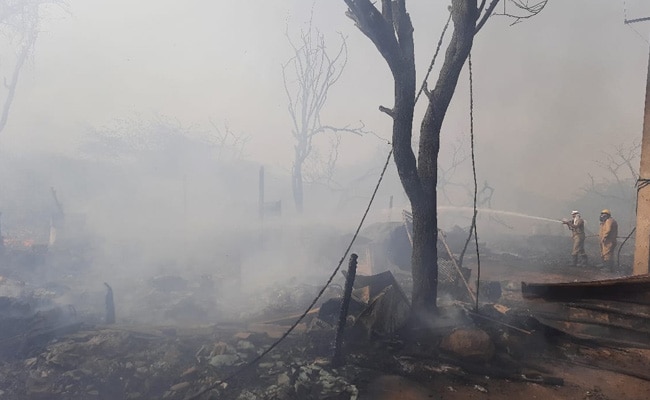 Several furniture and household essentials got damaged in the blaze.

No injuries have been reported in the incident and authorities suspect that a spark in the electricity cables in the shanties could have led to the fire.

Several furniture, household essentials, including LPG cylinders, and e-rickshaws parked in the slum cluster also got damaged in the blaze, officials said.

According to DFS officials, a call regarding the fire in Noor Nagar was received at 3.13 pm after which nine fire tenders were sent to the spot.

Later, four more fire tenders were rushed to the spot and the blaze was brought under control. The cooling process is still underway, the fire officials said.

After reaching the place, the police team also roped in local NGOs to assist in the rescue operations and informed civic agencies.

Staff from BSES, CATS Ambulance, and the SDM of the area also reached the spot, according to police.

"Around 40 to 50 shanties got burnt completely in the fire, and in preliminary enquiry, the main suspected cause is found to be due to a spark in the electricity supply cables in the shanties. However, no one has been reported injured in the incident," said RP Meena, Deputy Commissioner of Police (Southeast).

Further, rescue operation was taken up with the help of civic agencies while food and temporary shelter in the nearby Sarvodaya Kanya Vidyalaya are being provided to the victims, the officer said.

A case under Section 336 (act endangering life or personal safety of others) of the Indian Penal Code has been registered in the matter and an investigation is underway.

Chairman of the Delhi Waqf Board Amanatullah Khan also inspected the spot and assured financial aid to the affected families.

"The Waqf Board has assured financial aid of Rs 10,000 per family and on behalf of Delhi Government, Rs 25,000 will be given per family. All of them have been safely shifted to a school," said a Waqf Board official.