Pradhuman Singh Tomar had earlier cleaned drains and toilets in Gwalior and Shivpuri, videos of which had also gone viral on social media. 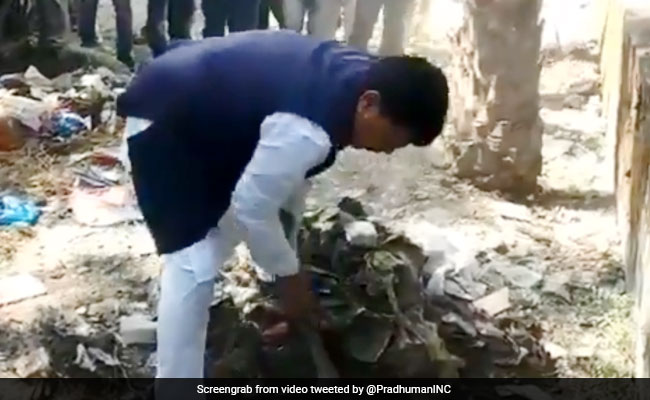 It is the duty of every citizen to keep their environs clean: Pradhuman Singh Tomar

A Madhya Pradesh minister on Monday took a spade to clean garbage near a warehouse in Indore, which has been named India's cleanest city four times in a row, and videos of the act went viral on social media.

Madhya Pradesh Food and Civil Supplies Minister Pradhuman Singh Tomar was on a visit to a warehouse run by his ministry in Bada Ganpati locality when he spotted dry waste like leaves, plastic etc and got down to set an example armed with a spade.

"It is the duty of every citizen to keep their environs clean. Filth breeds diseases like dengue, malaria,'' he told reporters.

Speaking to news agency PTI, Indore Municipal Corporation Commissioner Ashish Singh said, "We are ensuring cleanliness in public places all across the city. Cleaning all government premises is not our job."

Mr Tomar had earlier cleaned drains and toilets in Gwalior and Shivpuri, videos of which had also gone viral on social media.

On December 31, Indore was adjudged India's cleanest city for the fourth time in a row in the Central government's cleanliness survey.

It topped the "Swachh Survekshan League 2020" in the first quarter (April to June) and second quarter (July-September) results.

Girl Attacked With Axe On Delhi's South Campus By Neighbour