The manifesto 'Vision Document Tripura 2018' said Special Economic Zones (SEZs) would be be set up in the state for sectors like food processing, bamboo, IT and textiles. 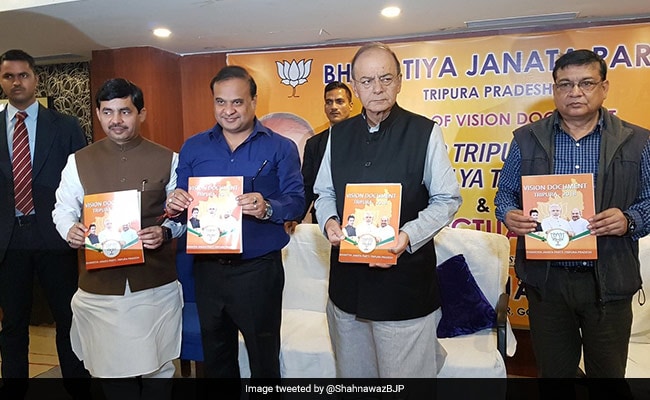 Agartala: BJP leader and Union minister Arun Jaitley today released the party's manifesto for Tripura Assembly election, which promised that SEZs would be set up in the state and smartphones would be given to the youth for free if the saffron party is elected to power in the state.

Election to the 60-member Tripura Assembly would be held on February 18. The BJP is contesting in 51 seats while its alliance partner Indigenous People's Front of Tripura (IPFT) has fielded candidates in nine seats.

The manifesto 'Vision Document Tripura 2018' said Special Economic Zones (SEZs) would be be set up in the state for sectors like food processing, bamboo, IT and textiles.

It promised employment to every household, free education for women till graduation, 7th pay commission salary to state government employees and free smartphones to youth.

Mr Jaitley said Prime Minister Narendra Modi wants the country to develop, which is why the BJP in Tripura has focused more on development issues in its vision document.

He said one degree college would be set up in each constituency of the state to upgrade the education system.

The senior BJP leader also announced that adequate number of multi-speciality hospitals and an AIIMS-like hospital would be set up in the state.

Tripura would be made a logistic hub for transportation in the entire northeastern region due to its proximity with Bangladesh and the ports in that country, Jaitley said.

The vision document states that stories of Tripura's erstwhile royal rulers would be included in school curriculum and Agartala airport would renamed after Bir Bikram Kishore Manikya, the last king of Tripura.

It promised investigation into the Rose Valley scam and those found guilty would be jailed.

The minimum grant under social welfare schemes would be Rs 2000 per month and the minimum wage would be Rs 340, the vision document said, adding CBI inquiry into the killing of two journalists Shantanu Bhowmick and Sudip Datta Bhowmick - would be instituted.
Comments
Tripura Assembly Polls'Vision Document Tripura 2018