Rosy Behera has been been working on a road project under Mahatma Gandhi National Rural Employment Guarantee Scheme (MGNREGS) near her home so that she can pay her college dues of Rs 24,500 to obtain her diploma certificate. 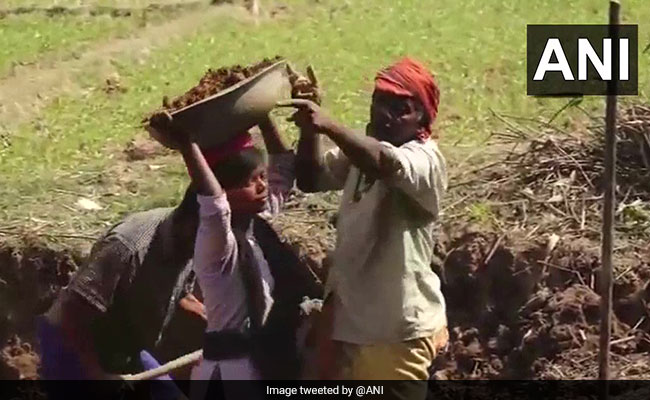 Rosy Behera has been working as a daily wager for the last three weeks to pay her college fees.

Rosy Behera, 20, a civil engineering student in Puri, has been working as a daily wager for the last three weeks to pay her college fees.

She has been been working on a road project under Mahatma Gandhi National Rural Employment Guarantee Scheme (MGNREGS) near her home so that she can pay her college dues of Rs 24,500 to obtain her diploma certificate.

"After completing my diploma in Civil Engineering in 2019, I am not able to arrange funds for my Bachelor's degree. I also have to pay an outstanding amount of Rs 24,500 to the diploma school," Rosy Behera told ANI.

A resident of Goradipidha village under Chainpur Panchayat in Puri district of Odisha, she has been carrying mounds of earth on her head as a daily wager instead of putting her civil engineering skills to work.

After acquiring her diploma, Rosy Behera said she had enquired with a private engineering college if she could pursue a B.Tech program on a government scholarship. She said that since she belongs to a Scheduled Caste (Harijan), her tuition fees would be borne by the government, but she could not afford the hostel and college bus fee.

"I was denied my diploma certificate by the college authority, despite my repeated request to college authorities and local MLA. I could not find other options to clear my hostel dues and bus fees. As I am a Harijan girl, the government was paying my entire college fees. But hostel and Bus fees were not included in it. Even our house is constructed on government land. As I passed matric with a good number, I got a scholarship from the government and joined Barunei Institute of engineering and technology (BIET) Khordha," she said.

To earn money, Rosy Behera started working as a daily wager under the MGNREGS along with her parents, sisters, and grandfather.

"My immediate younger sister came forward to help me despite her pursuing a B.Tech programme in computer science. I think the wage accumulated by family members from the MGNREGS work would partly solve my problem to get my certificate from BIET. But I have to arrange a lot of money for further studies," said Rosy Behera.

Sheshdev Rout, Block welfare extension officer, Delang Block said that the administration will look into the matter to help her.

"Rosy couldn't pay her college fees because of the financial situation. She hasn't received a diploma certificate. We will look into the matter, we will help her. We will report it to the administration to help her" he said.