The operator of an earth-moving machine died in a clash between police and the villagers during an anti-encroachment drive in Rajasthan's Nagaur district on Sunday, police said. 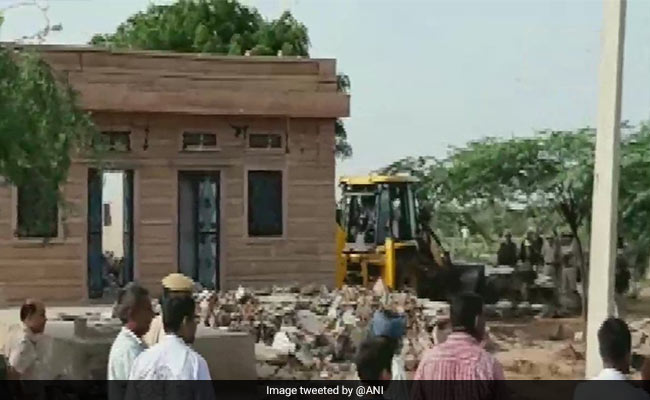 When its driver tried to escape, the mob caught hold of him and beat him up severely.

A driver of an earth-moving machine was killed and five government vehicles were vandalised by a mob during an anti-encroachment drive in Rajasthan's Nagaur district on Sunday, police said.

Additional Superintendent of Police (Headquarters) Sarjeet Singh told news agency Press Trust of India that a case had been registered against two MLAs-- Indira Bawari of Merta City and Pukhraj Garg of Bhopalgarh-- and 300 others for obstructing the public servants from discharging their duty and causing damage to government vehicles besides inciting people.

The husband of the Merta City MLA has also been charged.

The ASP said the drive was scheduled in Tausar village of the district, where 79 Banjara families had constructed "pucca" houses on an around 1.5-km stretch.

As per directions of the Supreme Court, the encroachments were to be removed.

On Sunday, when the anti-encroachment team, along with police force, reached there, those belonging to the Banjara families threw stones at the machine.

When its driver tried to escape, the mob caught hold of him and beat him up severely.

The driver, identified as Farooq (40), was immediately taken to a hospital, where he died.

The officer said additional force had been deployed in the area and the situation was under control.

Mumbai Metro Trials To Begin In January, Inauguration In May Next Year