Man Collapses, Dies At Chemist Shop In Bihar; No Help For 6 Hours

The man reportedly had breathing difficulties. He had gone to buy medicines at the Atmaram shop in a crowded market in Bhagalpur and was leaving when he fell at the entrance around 10.30 am on Tuesday. 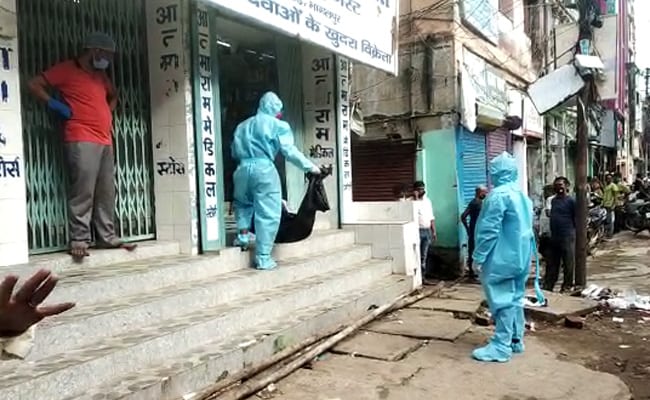 It is not known yet whether the man died of coronavirus.

A man who collapsed and died at a drug store in Bihar was left at the spot for six hours before an ambulance finally took the body away, exposing a frightening lack of sensitivity from people, police and the administration amid the coronavirus crisis.

The man reportedly had breathing difficulties. He had gone to buy medicines at the Atmaram shop in a crowded market in Bhagalpur and was leaving when he fell at the entrance around 10.30 am on Tuesday.

A crowd collected at the spot, located in the city's main market area, but no one tried to check whether he was alive or even went near the man, fearing a coronavirus infection.

There was no progress when the police arrived either. The team looked clueless on what to do. When a call to a senior police officer resulted in an ambulance driving to the shop located on a narrow lane, the driver allegedly sped away at the sight of the body.

It is not known yet whether the man died of COVID-19, but the visuals of a body left untouched for hours barely on COVID-19 suspicion has caused distress and anguish.

The owner of the drug store said the man collapsed immediately after buying medicines for breathing trouble. "He used an inhaler and sat down, then just fell. I tried to revive him, sprinkled water, he didn't move," said the shop owner.

He said he informed every agency or authority linked to coronavirus emergency response but nothing helped. "It has been an hour and a half," he said. Help did not arrive until 4.30 pm.

It would be a few more hours before the body was finally removed by an ambulance staffed with men in PPE suits. Policemen watched at a distance as the men placed the body on a black plastic sheet, wrapped it and put it on a stretcher.