Protests At Meenakshi Amman Temple Over Missing Statue In Madurai

The group believes that the authorities are intentionally keeping away the facts from them and this is an attempt to distort the history. 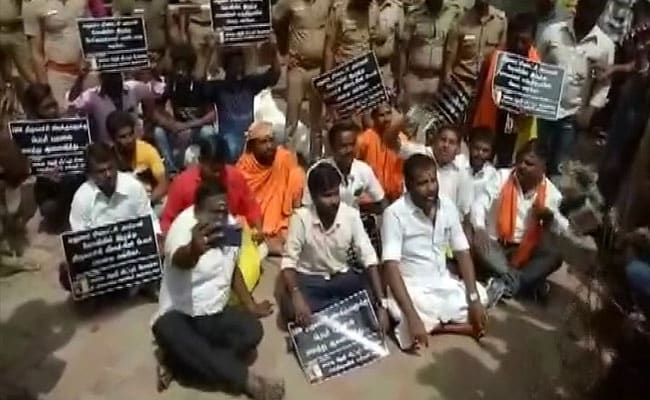 The statue is of Maruthu Pandiyar and has been reported missing.

The activists of Maruthu Thiruvar Makkal Kazgham on Sunday staged a protest outside the Meenakshi Amman Temple over a missing statue in the temple in Madurai in Tamil Nadu. The statue is of Maruthu Pandiyar.

"We had given an RTI on Maruthu Pandiyar statue in the Meenakshi Amman Temple but the temple authorities in their response say that they don't have any information on the statue. They have said that there is no statue in the temple. In this situation we are not sure whether the statue is there or not and that is why we are protesting today," said an activist.

Tamil Nadu: Members of Marudhu Thiruvar Makkal Kazagham protested at Meenakshi Amman Temple in Madurai today over the statue of Marudhu Pandiyar which is allegedly missing from the temple. The protesters have been detained by the police. pic.twitter.com/werQGYIgSj

The group believes that the authorities are intentionally keeping away the facts from them and this is an attempt to distort the history. Police have detained the protestors.