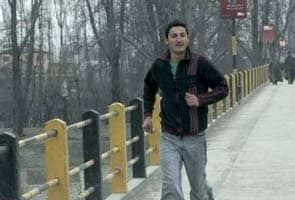 A scene from the film 'Zero Bridge', shot on the iconic bridge

Srinagar: History flowed down the Jhelum River in this Jammu and Kashmir summer capital Wednesday as the authorities started dismantling the six-decade-old Zero Bridge - said to be so named because it was constructed by a contractor who was deaf!

"The bridge was constructed by a local contractor who was deaf. 'Zorr' means deaf in Kashmiri and the bridge was initially known as the 'Zorr Bridge' which later changed to Zero Bridge," said an elder living across the Jhelum River in Rajbagh residential area.

Since its caved in wooden planks and piers could no longer support vehicular traffic, the Zero Bridge, located two kilometres from city centre Lal Chowk, was closed for vehicular traffic two decades ago.

Only pedestrian movement was allowed on this historic bridge after its closure, as paramilitary bunkers were constructed on both sides of the bridge with the beginning of the separatist violence in Kashmir in the late 1980s.

The bridge is close to the high security Church Lane area, which houses the private office of the chief minister, state guest houses where VVIP's stay during their visits and the official residences of dozens of ministers, senior civil and police officers.

Zero Bridge was constructed in 1950s when late Bakshi Ghulam Muhammad was the prime minister of Jammu and Kashmir.

There is a mundane official version of why the bridge was so named.

"Since Amira Kadal, ahead of which the Zero Bridge was constructed on the Jhelum River, was known as the First Bridge, the name Zero Bridge was given to this wooden bridge," said an official of the state-owned J&K Projects Construction Corporation that is supervising the dismantling of the bridge.

Some say the original name suggested for the bridge had been Habba Khatoun Bridge, after the 17th century local queen-poetess.

The Bridge is regarded as part of the local heritage by many and in order to address the local sensibilities the state government has decided not to construct a cement concrete bridge as a replacement.

"A wooden bridge would be constructed at the site to preserve the original architecture of the dismantled bridge," said a senior government official here.

Enthused by the name of the bridge, some Kashmiri youths in New York started a rock band three years back naming it 'The Zero Bridge Rock band'.

Promoted
Listen to the latest songs, only on JioSaavn.com
As huge machines started dismantling the Zero Bridge, scores of locals watched the spectacle silently as fond memories of their childhood kindled nostalgia.

"We would cycle up and down the bridge each day of our school life. The bridge was an icon of my childhood. Perhaps like the bridge, we have also grown old and are now waiting for our turn to be dismantled," said Nisar Hussain, a retired chief engineer here.

Delhi Man Gets Friends To Attack Him For Gaining Sympathy, 2 Arrested: Police