Police said just as they entered the Bristol Chowk underpass in Gurgaon's DLF Phase 1, a Scorpio came from the opposite direction and hit their car. 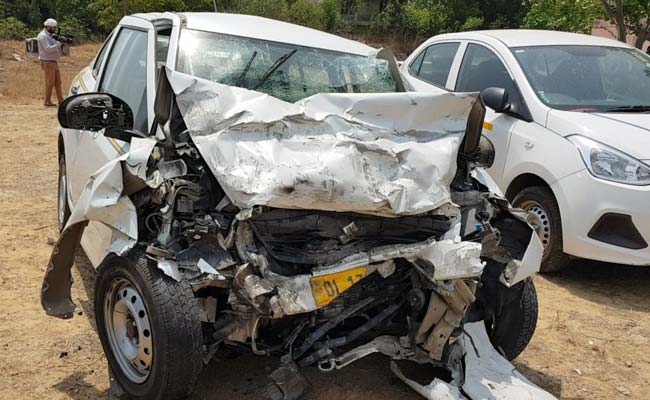 A Scorpio crashed into a Swift DZire in which the IndiGo pilot was travelling in Gurgaon.

Gurgaon: A 30-year-old IndiGo pilot has been seriously injured after a Scorpio crashed into the cab in which she was going to the Delhi airport early Sunday morning. The cab driver and the security guard accompanying the pilot died on the spot in the accident that took place in an underpass in Gurgaon.

At around 5:30 in the morning, a Scorpio car collided with the Swift DZire in which the pilot, Suvarna Sripalli Gayatri, was travelling to the airport from her home in Gugaon's Sector 61. Police said just as they entered the Bristol Chowk underpass in Gurgaon's DLF Phase 1, a Scorpio came from the opposite direction and hit their car. So strong was the collision that despite the air bags of both the vehicles opening, the driver and the guard in the pilot's car died on the spot. The Scorpio driver fled the spot and is absconding. Police believe the Scorpio driver may have been coming from the wrong way in the underpass.

The cab driver who died has been identified as Vinod Yadav and the guard travelling with the pilot was Kishore.

Suvarna Sripalli Gayatri was taken to Gurgaon's Medanta hospital and is believed to be in a critical condition.

Promoted
Listen to the latest songs, only on JioSaavn.com
Police said the Scorpio has a Delhi registration under the name of one Pradeep Kumar and that there was a fake sticker of Lok Sabha MP on it. A case has been registered and police are looking out for the absconding driver.

The front part of the white Swift DZire seemed badly mangled after the crash.