The metre-gauge engine, bearing No.253, which had been lying decrepit at Lohat Sugar Mill, owned by the Bihar sugarcane industries department in the district, was brought to the station premises late last night. 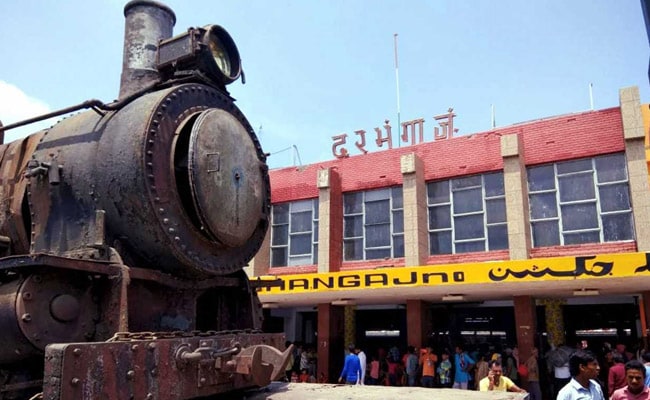 An England-made steam rail engine of 1913 vintage, said to be the first locomotive that was brought to Darbhanga for haulage work at a sugar mill, was installed today in front of the Darbhanga railway station and will soon be refurbished, a senior official said.

The metre-gauge engine, bearing No.253, which had been lying decrepit at Lohat Sugar Mill, owned by the Bihar sugarcane industries department in the district, was brought to the station premises late last night.

"This is a made-in-England steam engine that lay in a state of decay at the sugar mill. After campaign by a group of heritage activists, we had written to the Bihar government to shift the engine, which then gave the permission. The proposal was cleared by the state Cabinet in March," Divisional Railway Manager, Samastipur Divison, R K Jain said.

The engine is very historic as it is said to be the "first locomotive" brought to Darbhanga for use at a sugar mill, he added.

"The engine has been kept on rails in front of the station. It needs a lot of work, as it is in decrepit state. Our experts will work on it to refurbish and paint it. We will display it proudly," he told PTI.

From rotting in a corner of a mill to finding a pride of place in the city, the engine may have reached its marked destination, but its journey yesterday had almost got derailed.

A group of people had gathered around the truck when the engine was loaded on its transportation, and protested the shifting of the engine, sources said.

"Some people, with motivated intensions had protested its shifting. The authorities then told them that the engine was being shifted to the station only and persuaded them to cooperate," a source said.

Mr Jain said the engine, made for a narrow-gauge track, is card a 'captive engine' as it was kept at one place for usage, as in the sugar mill.

Photographer and local heritage activist Santosh Kumar, who was among the few people who had approached the railways, seeking rescuing of this rail heritage, said all the struggle has paid off.

"This step will encourage heritage preservation in Darbhanga. There are four old engines at another sugar mill in the district, they should also be rescued and displayed in front of other stations," he said.

Railways in Darbhanga came in 1874 and rulers of Darbhanga Raj had their own royal trains and saloons.

Railways in the regions were known by different names in different periods, and also as Tirhut Railway. Darbhanga currently falls under Railway's Samastipur Divison.