Piped water at his hospitals has already dried up, and even the more expensive water trucks he now relies on may be unavailable soon in Tamil Nadu. 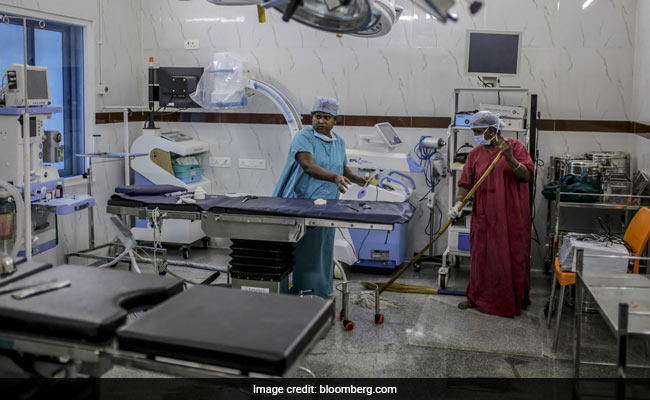 Along with other doctors in Indian cities facing unprecedented water shortages, T.N. Ravisankar in Chennai is praying for rain-and soon.

Treating patients will "depend on God's mercy" if water supplies in India's fourth-largest metropolis aren't replenished shortly, said Ravisankar, the chairman of Sudar hospitals, a chain of four clinics with 150 beds. Piped water at his hospitals has already dried up, and even the more expensive water trucks he now relies on may be unavailable soon in Tamil Nadu.

"The cost escalation will have to be passed on to patients, who will have to spend more," Ravisankar said. "If the situation continues, after a month we won't be able to serve patients."

Failed rains last year and delays in this year's annual monsoon have left nearly half of India facing drought-like conditions, according to the South Asia Drought Monitor. Tamil Nadu is trapped in a "severe dry" cycle along with other states like Karnataka, Andhra Pradesh and Maharashtra.

Up north, New Delhi has recorded the worst monsoon delay in 45 years. With piped water supply available to less than a fifth of Delhi homes, political parties have traded barbs with the state government over the lack of planning for water-truck supplies to large swathes of the city.

As the impact of climate change worsens, water is shaping up to be a serious economic risk in Asia's third-largest economy. Desertification, land degradation and drought cost India about 2.54% of gross domestic product in 2014-15, according to a study last year by India's environment ministry.

India has witnessed widespread droughts in four of the past five years, and the government forecasts that per head availability of water will fall by 35% next year from 2001 levels. Hospitals, which rely on water for sanitation and preventing infections, are suffering as the cost of water rises.

The administration of Prime Minister Narendra Modi, who promised an ambitious healthcare expansion ahead of his re-election in May, announced a water conservation awareness program on July 1. Yet it's unclear if the measures will be enough to ensure a steady supply of clean water.

"Not many are informed about just how big the dangers are," said Arivudai Nambi Appadurai, head of India adaption strategy at the World Resources Institute, a Washington-based group that researches ways to protect the environment. "The quality of water being bought even by homes in drought-struck areas has caused allergies, sending more patients to local hospitals in places like Chennai."

Almost all of Chennai's hospitals are now completely dependent on the more than 5,000 privately-owned tankers that ferry water around the city every day, according to N. Nijalingam, president of the Tamil Nadu Private Water Tanker Lorry Owners' Association. But it's becoming tougher to source water even from 100 kilometers (62 miles) away, he said.

"If the situation continues, after a month we won't be able to supply water even to the people who can pay a huge sum for a tanker of water," he said.

The price of a 12,000-liter water truck soared from 1,200 rupees ($17.50) in April to as high as 6,000 rupees since shortages began, The News Minute website reported. Smaller nursing homes and clinics in Chennai, a medical tourism hub, have been hit harder than larger hospitals that have more money, according to Balaji Venu Gopal, a vascular surgeon at Apollo Hospitals in Chennai.

"Nobody has come out openly to raise the issue and seek government support so far," said Venu Gopal. "But the crisis is definitely cutting the profit margin of the medical industry."

The water shortages risk further hurting the already struggling state-run health system. India spends only around 1% of GDP on healthcare, and aims to increase it to 2.5% by 2025. By comparison, nations whose entire populations have access to health services spend as much as 6% of GDP on insurance and healthcare, according to the World Health Organization.

"The pressure on us rises every time there's a drought," said Ashok Thorat, chief medical officer at a state-run hospital in Beed, Maharashtra. "More people turn up at our government hospital because private clinics have to pay more to buy water and pass on costs to patients. We can arrange at least some free water from the municipal corporation, but even that has limits."

Thorat says his hospital, which serves a town of 147,000 people about 380 kilometers east of Mumbai, had to buy two water trucks of about 10,000 liters each in May. His 500-bed hospital needed more trucks in June after rains failed and piped supplies stopped.

In Chennai, Ravisankar says a long-term solution is needed. Rainfall in southern India this week was 30% below normal levels, according to the India Meteorological Department.

"Right now, there's an emergency so the government is bringing water by trains," Ravisankar said, referring to supplies that are typically reserved for drinking water instead of hospitals. "But beyond this? It's all left to nature."