The weather office has forecast heavy rain in Chennai and 'very heavy rainfall' in coastal Tamil Nadu. Schools and colleges in Kancheepuram, Tiruvallur and Puducherry are also closed due to bad weather

Chennai: Schools and colleges in Chennai are closed today after the weather office warned of heavy rain in the overcast southern city, a day after it poured all day and forced schools to ring the last bell an hour early at 3 in the evening. An overcast sky still hangs over Chennai today as it had been raining most of the night from 8 pm till just before dawn today.

The meteorological office has forecast heavy rain in Chennai and "very heavy rainfall" in coastal Tamil Nadu. Schools and colleges in Kancheepuram, Tiruvallur and Puducherry are also closed today.

Rainwater has accumulated at several areas on the outskirts of Chennai, say residents who had to wade through knee-deep water outside their homes. The areas where water has not receded include Velacherry, Perambur and Kolathur.

Residents have pointed out that many locations in the city don't have storm water drains to quickly flush out water during a long downpour. The Chennai municipal agency has said storm water drains are being built in extension areas.

Many of these extension areas came under the Chennai Corporation only a few years ago. Most of these were once illegal constructions built upon encroached lakes and water bodies, but regularised by the state government over the years. 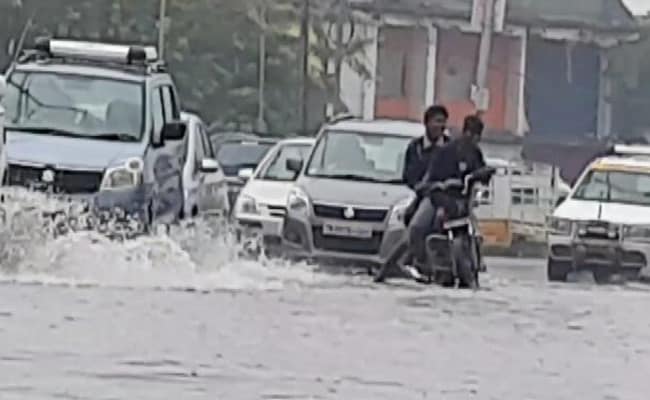 The meteorological office has forecast heavy rain in Chennai

Yesterday, heavy traffic jam was reported from across Chennai after it rained the whole day. The weather office said the heavy rain is the result of northeast monsoon that hit the southern coast a few days ago. Vehicles could be seen stuck for a long time on some major roads in Chennai yesterday, including Velachery and OMR or IT Corridor.

In the northern parts of Chennai, water had accumulated on the road and some ground-floor homes in several areas including Kilpauk and Koyambedu. A tree that fell in Mambalam area blocked traffic, close to the commercial hub of T Nagar.

Promoted
Listen to the latest songs, only on JioSaavn.com
In December 2015, Chennai was flooded after the heaviest rainfall in over a century, paralysing the airport and flooding factories in the state that is home to nearly 70 million people. At least 150 people died that year because of heavy rain.

Puducherry and its suburbs were also lashed by heavy rain yesterday. Traffic in the Union Territory also came to a crawl as in Chennai.

Coronavirus: 4-Day Total Lockdown In Chennai, Madurai, Coimbatore Not To Be Extended