The robbery was suspected to be an inside job, said police. 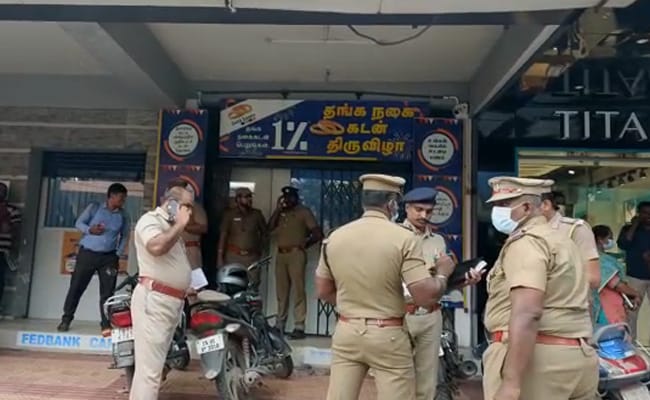 The police have formed special teams to catch the culprits.

Thirty-two kg Gold, reportedly worth several crores, was looted from a bank in Chennai this evening. Three men in masks locked the employees in a toilet before they robbed the FedBank Gold Loan in the city's Arumbakkam area.

"They took the keys of the strong room and locked the employees in a toilet and escaped with the gold in carry bags. According to the branch, 32 kg gold was stolen," Police Commissioner Shankar Jeewal explained the modus operandi of the robbers.

The robbery was suspected to be an inside job, said police.

"One of them is suspected to be a present employee of the branch," TS Anbu, Joint Commissioner of Police, told NDTV.

Meanwhile, in a video that NDTV couldn't independently verify, a security guard who claimed to be attached to the gold loan office, says, "I turned unconscious after I consumed the soft drink they offered me".

"All are fine now. No employee is unconscious. Since one of them was an employee, the guard didn't suspect anything," a police officer added.

The branch was closed today and only a few were present for some accounts work.

The police have formed special teams to catch the culprits.