Social Distancing Goes For A Toss As Migrants Protests In Chennai

The protests failed to follow any social distancing guidelines even though Chennai has the highest number of coronavirus cases in the state, accounting for 49 per cent of the total. 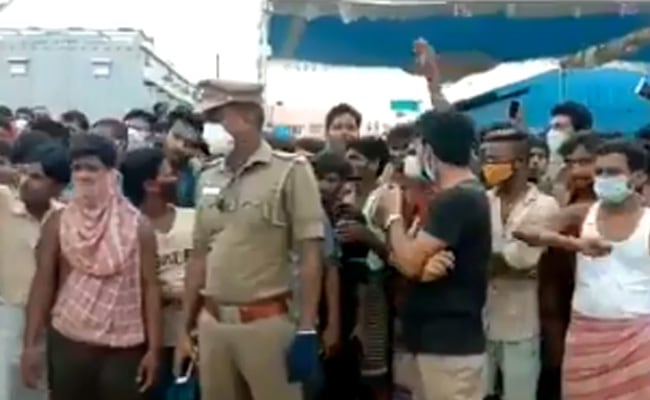 The protests were reported from Velachery, Pallavaram, Park Town and one another locality in Chennai.

Hundreds of migrant labourers took to the streets in Chennai, Tamil Nadu, on Saturday demanding arrangements for their return to home states. Many also attempted to march to the Ripon Building, the local body's headquarters.

The protests were reported from Velachery, Pallavaram, Park Town and one another locality in the city.

The protests failed to follow any social distancing guidelines even though Chennai has the highest number of coronavirus cases in the state, accounting for 49 per cent of the total.

The protests happened a day after a train left from Telangana carrying hundreds of migrants, and Kerala too started the process to send back the workers to their home states.

The Assam government has appointed senior bureaucrat Dr Atulya Misra as the nodal officer for home states of migrants to coordinate their return but nothing has been started so far, leading to worry among the stranded. Chief Minister Edappadi K Palaniswami had also asked district collectors to establish the number of migrants in their districts.

After the protests, the state government asked migrant workers, students, tourists, pilgrims and others stranded in Tamil Nadu to register themselves on the website nonresidenttamil.org.

The government also asked citizens stranded in other states to register on this site -- originally designed only for Tamil residents stranded abroad and wanting to return.

Amid an estimated 2 lakh migrants working in Tamil Nadu, the state is funding only around 13,000 migrants, including those who got stranded on transit when the nationwide lockdown was announced on March 24. It's free dry ration has been given only to a small percentage of workers who had registered with the welfare board for migrants. Many of their employers have not paid the salary for April.

Last week, at Sriperumpudur, around 20,000 people were without adequate food and money. The collector said: "We have recommended the state government to provide dry ration for all of them. Now the police is distributing 10,000 packets of cooked rice supplied by a private company."

Recently, around 1,000 migrants stranded in Chennai lodges protested against alleged harassment by lodge owners. They had demanded government intervention and asked to be sent back to their home states.

No Easing Of Curbs, Chennai Cops Force Hundreds Of Shops To Shut