After 2-Day Fire, Chennai Ponders How To Demolish This Building

The fire began at 4 am yesterday in the seven-storey building, reportedly as the result of a short circuit 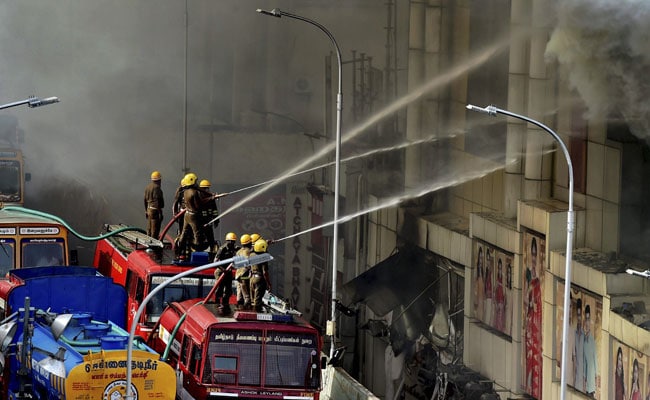 Declaring the area unsafe, the police have cordoned off the busy T Nagar area.

Chennai: A major market in the heart of Chennai remains blocked off as a fire raged for the second day in a row at a large shop which sells textiles. By the afternoon, the fire was nearly extinguished, but the area remained covered in thick smoke.

No injuries have been reported; 12 people were rescued using hydraulic lifts.

The top five floors of the building that houses Chennai Silks caved in this morning because of the intense heat. The fire began at 4 am yesterday in the seven-storey building, reportedly as the result of a short circuit. The Housing Minister Udumalai Radhakrishnan said that the building had legal permission for only four floors.

Declaring the area unsafe, the police have cordoned off the busy T Nagar which has forced the shutdown of other shops and offices in the area for two days. Zero visibility was reported for upto two kms till noon.

Over 150 fire fighters battled the flames. More than 100 water tanks were used, but narrow roads made it tough for emergency equipment to be brought to the spot.

"We had to demolish a portion of the front exterior of the building so that water could be let deep inside," a fireman was quoted as saying by the Press Trust of India.

Tamil Nadu Revenue Minister RB Udhaya Kumar visited the area along with experts including one from the IIT Madras to assess the damage.

He said the next step for the government was to "remove the building without causing any disturbance to commercial and residential buildings in the vicinity."

However, he acknowledged that it will be tough to demolish the structure.